Ailsa’s Where is My Backback? blog is fun to read and offers weekly photo challenges. I felt inspired by this week’s travel theme: big. So here we go…

El Jem, Tunisia
This is of the biggest Roman amphitheaters, truly an amazing sight in the Tunisian desert!

END_OF_DOCUMENT_TOKEN_TO_BE_REPLACED 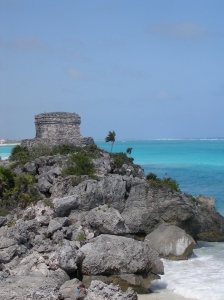 “We followed the coast day and night and the next day toward sunset we sighted a city or town so large that Seville would not have appeared bigger or better; one saw there a very large tower; on the shore was a great throng of Indians, who bore two standards which they raised and lowered to signal us to approach them; the commander did not wish it. The same day we came to a beach near which was the highest tower we had seen.”

That is how Juan Diaz described Tulum in 1518. Diaz was a member of a Spanish expedition of four ships and two hundred men led by Juan de Grijalva and organized by the governor of Cuba eager to find Mayan gold. They first landed at Cozumel island and continued south, soon reaching the walled city. The tower that Diaz was so impressed with was El Castillo, a pyramid facing the ocean that served as a watchtower and a lighthouse and is Tulum’s trademark till today. When I saw the ruins on my trip, I could imagine the conquistadors sailing by in their ships, mouth agape, staring at a mighty fortress perched on the top of a rocky coast. They were the first Europeans to see Tulum – or at least the first ones to write about it – and must have been quite in awe given Diaz’s admission that it could rival a contemporary European city. Seville-in-the-Caribbean survived seven decades after the Spanish conquest but eventually was abandoned when the Old World diseases decimated the local population. END_OF_DOCUMENT_TOKEN_TO_BE_REPLACED