I like to think about travel as a 4D experience, a space-time thing that I occasionally manage to capture on my blog.
Standard

Even from a quick glance it’s abundantly clear that Copenhagen is – and has been for centuries – the place of commerce. Copenhagen is located on a busy maritime route between the Baltic and the North Sea. Its name in Danish, København, means “merchants’ harbor.” Indeed since the city’s beginnings in the 11th century as a humble fishing village Kopenhagen has been attracting economic activity with its excellent natural harbor and rich fisheries.

The most photographed place in the city, 17th-century canal and waterfront called Nyhavn, features picturesque houses of merchants and historical wooden ships that once used to carry trading goods. Constructed by King Christian V, Nyhavn became the key gateway from the sea to the inner city center, Kongens Nytorv, or King’s Square, where ships unloaded cargo and fish. Today Nyhavn is a great place for people watching and to grab a tasty bite. Don’t miss smørrebrød, a Danish version of sandwich but I’d say it’s more accurately described as an excuse to put a whole lot of delicious stuff on a slice of bread. Many places offer great smørrebrød throughout the city, it’s not hard to find. The one I enjoyed just off Nyhavn was Cafe Brooklyn (Toldbodgade 3).

Continuing with Copenhagen’s commercial heritage, another place not to miss is Børsen, a gorgeous Dutch renaissance style building constructed by King Christian IV in the early 17th century. It was built to house the stock exchange, reflecting the growing importance of commerce in the country’s economy and in the life of its capital city. The most impressive part of the building is the dragon spire – four intertwined dragon tails topped by three crowns symbolizing the empire that spanned Denmark, Norway, and Sweden. Børsen housed the Copenhagen Stock Exchange until 1974. END_OF_DOCUMENT_TOKEN_TO_BE_REPLACED

On Saturday, terrible, tragic news came from Nepal… a devastating 7.8 magnitude earthquake leveled ancient temples of the Kathmandu Valley, collapsed houses, and killed thousands. I still can’t quite process what happened. It’s hard to fathom that beautiful, peaceful Durbar Squares of Kathmandu, Patan, and Bhaktapur – which I visited just less than a year ago – were destroyed in a matter of seconds. These sacred spaces, in a few terrifying moments of the ground shaking violently in pointless wrath, became hell on earth.

I know that Nepal will recover and rebuilt. Destruction on that scale – and even larger – happened in 1934 when the 8.0 magnitude earthquake did similarly unimaginable damage. I remember when visiting the ancient squares and temples I was looking at old black-and-white photos of how these places used to look prior to that earthquake. I’m sure one day we’ll look again at the painful before-and-after photos flooding the media now and, with the perspective of time, appreciate the country’s renewal after tragedy.

In the meantime, my heart goes out to all the victims who suffered in this terrible event. And my mind, weary of the images of death and destruction, longs for Nepal’s serenity, temporarily lost but sure to be recovered – hopefully soon. Behold the Garden of Dreams. END_OF_DOCUMENT_TOKEN_TO_BE_REPLACED

In January I made a trip to Los Angeles as a musical pilgrimage of sorts. I am a big fan of Henryk Górecki, a contemporary Polish composer best known for his haunting Third Symphony, Symphony of Sorrowful Songs. He wrote this piece in 1976 and initially it wasn’t well received. It didn’t become famous until a 1991 recording with the London Sinfonietta, featuring the soloist soprano Dawn Upshaw. This recording to date has sold more than a million copies – more than any other contemporary classical record – making it a rare commercial success in the world of classical music. Górecki commented on this unexpected success,“Perhaps people find something they need in this piece of music […] somehow I hit the right note, something they were missing. Something somewhere had been lost to them. I feel that I instinctively knew what they needed.” END_OF_DOCUMENT_TOKEN_TO_BE_REPLACED
Standard

A few years ago I tested the idea of tropical Thanksgiving – and loved it. After a wonderful week in Puerto Rico the idea of escaping the cold during the holidays and doing something different has stuck with me. That is how my husband and I ended up in the tropics again during Christmas.

Saint Lucia is a tiny island in the Southern Caribbean. Volcanic in origin, the island is more mountainous than most and framed by two magnificent peaks, Gros and Petit Piton, that steeply raise out of the ocean near the town of Sourfiere. They are the island’s hallmark and a truly magnetic sight – you first see them on the approach from the plane and you just can’t avert your eyes! The Pitons anchor St. Lucia like two giant sails, as if the island were a boat sailing through the Caribbean.

Over several centuries since the first European settlers arrived, the island has changed hands many times between the French and the British. Their feud and competition for St. Lucia made it known as the “Helen of the Caribbean” or “Helen of the West Indies.” The British took definitive control in 1814 and today English is the island’s official language – and traffic moves on the left. But the French have left their mark, too. The majority of the population is Catholic and speaks French Creole (Kwéyòl) known as patois. END_OF_DOCUMENT_TOKEN_TO_BE_REPLACED 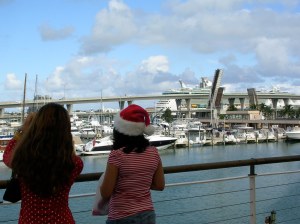 I’ve been to Miami several times – and loved every single one of them. Miami and the surrounding area has so much to offer: Ocean Drive, Coconut Grove, Key West, the Everglades… the list goes on.

The first time I went there as a student on a spring break – just a kid on a classic American road trip in a crowded van, escaping frosty Pennsylvania for the warmth of the southern sun. As you can imagine, the long journey itself was quite an adventure and it made reaching a Miami tent camp feel like arriving in the promised land. In fact, Miami very much felt like some kind of foreign land full of what at the time were very exotic items to the young me raised up north: palm trees, alligators, ever-present salsa beat, and arroz con frijoles negros =)

My subsequent trips thankfully involved more civilized modes of transportation – and more sophisticated lodging and food choices. In fact, I was just there last week (unfortunately just for one night while in transit), enjoying amazing ceviche and mahi mahi tacos at my favorite Coconut Grove restaurant, Jaguar. I’m always ready to go back and explore more. That’s why I was excited to see that FlipKey picked Miami Beach as the location for one of its inaugural virtual tours, a new feature to enhance pre-trip research. END_OF_DOCUMENT_TOKEN_TO_BE_REPLACED

Nestled at the foothills of the majestic Alps (that is what the Piedmont means literally, “at the foot of the mountains”), Turin is conveniently located close to France, Switzerland, and the Italian coast. It is surrounded by Piedmontese vineyards famous for Barolo Barbaresco wines made from the Nebbiolo grape, and close to the truffle capital, Alba. A compact city center makes it easy to reach major attractions by foot. All these make Turin a wonderful place to visit and the city has been reclaiming its fame in recent years, boosted by hosting the 2006 Winter Olympics. Ready for a quick tour? END_OF_DOCUMENT_TOKEN_TO_BE_REPLACED

As far as I’m concerned, every visit to London is a special treat. This year, an amazing art project commemorating the World War I, made it even more special. For a few brief months (August 5 to November 11, 2014 to be exact), the moat surrounding the mighty Tower of London was transformed into a crimson sea of poppies – one for each British soldier fallen during the Great War. Created by artist Paul Cummins and designer Tom Piper, the installation called Blood Swept Lands and Seas of Red filled the moat over the summer with 888,246 hand-made ceramic poppies. END_OF_DOCUMENT_TOKEN_TO_BE_REPLACED

Ok, more than one… but that cult 1984 song from Chess kept playing in my head for the duration. What can I say? The city’s vibe is still the same =)

END_OF_DOCUMENT_TOKEN_TO_BE_REPLACED

Just like its sister cities, Bhaktapur boasts an impressive Durbar (Palace) Square anchored by the Palace of 55 Windows built in 1427 and adorned by a masterpiece of woodcarving – a balcony with 55 elaborate windows. The statue of King Bhupatindra Malla, who remodeled the palace in the 17th century, faces the edifice on a tall column. The palace remained the seat of the local Malla king until 1769 when Nepal was unified under the Shah monarchy. It now houses the National Art Gallery, with the entrance flanked by two guardian stone lions. Nearby, the magnificent Golden Gate or Sun Dhoka opens to the inner courtyard of the Palace of 55 Windows, stunning visitors with a masterful frieze featuring Hindu deities set against the red brick entryway and surrounded by the white palace walls. END_OF_DOCUMENT_TOKEN_TO_BE_REPLACED

The journey through Nepal’s fascinating Kathmandu Valley continues… After visitng the sacred spaces of Kathmandu (part 1), the next stop is Patan. Although today Patan is basically a suburb of Kathmandu located just south across the Bagmati river, it once was an independent city-state fiercely competing with the two other major cities in the valley – Kathmandu and Bhaktapur – over prestige and influence. Also known as Lalitpur, meaning the City of Beauty, or by its old Newari name, Yala, Patan was originally designed in a Buddhist tradition with four mounds on its perimeter known as Asoka Stupas. According to legend, Emperor Asoka of India visited Patan in 250 BC and built the stupas. But the heart of Patan, just like its sister cities in the Kathmandu Valley, is its magnificent Durbar (or Palace) Square.

The Malla kings ruled the Kathmandu Valley’s city-kingdoms through the medieval period until the ascension to power of the Shah dynasty and unification of Nepal in 1768. Much of Patan’s stunning architecture dates back to the Malla period. In some ways, Patan’s Durbar is even more eye-poppingly beautiful than Kathmandu’s simply because it’s more compact. While Durbar in Kathmandu consists of three loosely connected squares – all magnificent in their own right – here all the amazing temples fit into one very much postcard-like square. END_OF_DOCUMENT_TOKEN_TO_BE_REPLACED