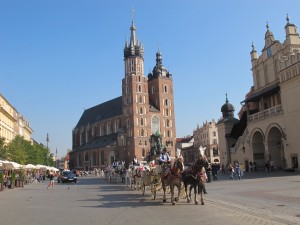 Having lived in Kraków, I find it hard to blog about it: there is just so much to say. It’s such a great place, special in so many ways, and returning there always feels like recharging batteries. The Main Square especially, even though it is probably the most touristy part of town, has this special energy. First, there is the scale: with sides about 200 meters long it is one of the largest medieval squares in Europe. Then there is history: over the ages the square has been its witness. From the spot now marked by a church where St. Adalbert (Wojciech) preached back in the 10th century, through the place of homage by Prince Albert Hohenzollern of Prussia to Polish King Zygmunt I in 1525, the location where Tadeusz Kościuszko took an oath to defend the country against foreign partitions in 1794, to the commemorative plaque placed there upon Poland’s entry into the EU in 2004. Finally, there is the atmosphere: old churches next to hip cafes, high-end restaurants competing with obwarzanki stands (Polish version of a bagel), kids chasing pigeons around the local landmark of poet Adam Mickiewicz’s statue affectionately known as “Adaś”… Life here flows to the rhythm of Hejnał Mariacki, traditional tune played by a trumpeter each hour from the tower of the stunning St. Mary’s Church.

Kraków has a special kind of magic and the best way to discover it is on foot. Scores of websites and travel guides provide excellent routes and list top attractions. But I want to mention a few spacial places that Frommer’s may not know about. The logical number one stop is the majestic Wawel Castle, former royal residence. For those seeking magic – literally – a must see is the St. Gereon’s chapel in the western wing of the castle, a spot where according to the legend Hindu god Shiva threw one of seven magic Chakra stones (the other six supposedly landing in Delhi, Delphi, Jerusalem, Mecca, Rome and Velehrad). For the believers – and there are many – the stone is a source of unusual energy. But you don’t have to follow occultism to enjoy the magic of Kraków. These are just a few of my favorite magical places… 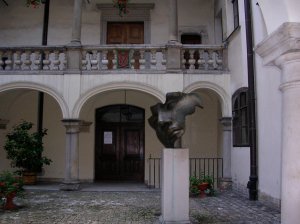 Strolling from the Wawel Hill toward the Main Square, stop at Grodzka 53 across the street from the Church of Saints Peter and Paul at the Collegium Iuridicum building of the Jagiellonian University. Puchased for the Faculty of Law in the early 15th century, it is a gorgeous structure enclosing a spacious quadrangle. In the 17th century arcaded galleries surrounding the courtyard were added and in 1996 sculptor Igor Mitoraj donated one of his pieces for this amazing space: Luci di Nara (The Lights of Nara). Its modern yet classical form feels quite surreal but at the same time uniquely fitting hidden among these Gothic and Renaissance walls. It is also easy to recognize the hand of the same artist here as in a most recent – and much larger – sculpture that has adorned the Main Square since 2003: Mitoraj’s fascinating Eros Bendato.

Heading north on Grodzka turn left on Poselska and stop by at the Archeological Museum at Senacka 3. It is the oldest such institution in Poland founded in 1850, today holding over half a million of exhibit items. Since 1967 the museum has been haused in a complex that used to be the site of St. Michael’s church built in 1635 and Carmelite monks’ monastery. After Poland’s partitions, the monastery was confiscated in 1797 by the Austrian government and turned into a prison, the function it served until 1950. The museum’s greatest attraction is four-sided limestone pillar associated with a pagan deity Światowid, dating back to the 9th or 10th century. Discovered in Zbrucz, Ukraine in 1848, the statue is one of the best preserved examples of pre-Christian Slavic beliefs. But even just a stroll in the museum’s lush garden makes it worth a visit and offers an unmatched view of the Wawel Castle. 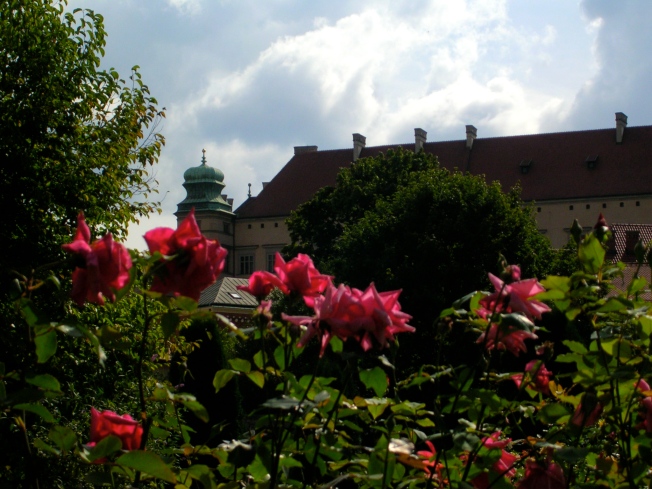 Gardens of the Archeological Museum 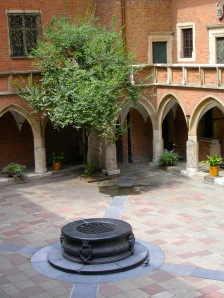 Once on the Main Square, take a detour to Collegium Maius of the Jagiellonian University. Located at the corner of Św. Anny and Jagiellońska streets, it is the oldest university building in Poland. The University was founded in 1364 and King Władysław Jagiełło purchased the building that became Collegium Maius in 1400. The University then purchased surrounding houses to form a beautiful arcade-enclosed courtyard. A hallmark well is the focal point of this special place and all you need to do is close your eyes to imagine the hundreds of scholars and students who have walked among these walls throughout the ages. Professors lived upstairs and lectured downstairs, counting Nicolaus Copernicus among the students. The building also housed a library and today is the university museum. Don’t miss the courtyard chiming clock that performs a parade of wooden figures of kings and professors. And take a break at a cozy cellar cafe U Pęcherza.

From Collegium Maius head toward Krupnicza 26 – the house of artist Józef Mehoffer. He purchased the property and the adjacent garden in 1932. The house, today restored as a museum, holds an impressive collection of stain glass compositions, oil paintings, drawings, and decorative designs. My favorite work of Mehoffer is Red Umbrella painting. But the real highlight of this place for me has always been the garden. It truly is an oasis of peace and beauty hidden away in the dense urban landscape. In the summer it is filled with colors and fragrances of lilacs, peonies, roses, and jasmines. 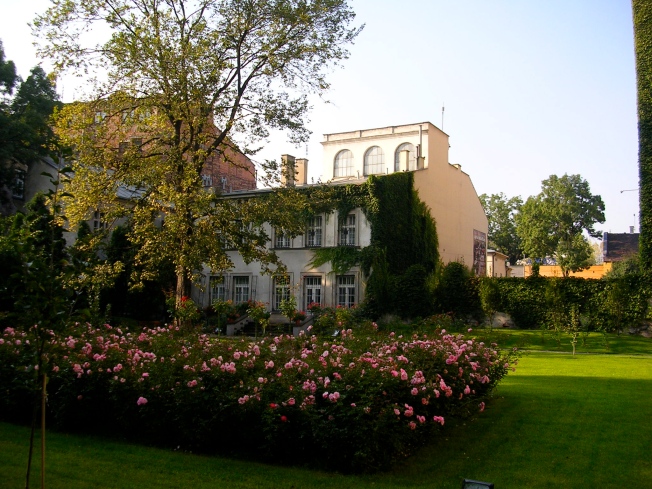 Steps from Mehoffer’s house is Dynia Cafe, a restaurant that not only offers the best ever pumpkin soup (true to its name) but has a secret garden of its own. And if you’re tired of walking, there is another way of exploring Kraków that Konstanty Ildefons Gałczyński captured so well in his 1948 poem: zaczarowana dorożka, zaczarowany dorożkarz, zaczarowany koń (enchanted carriage, enchanted coachman, enchanted horse)… 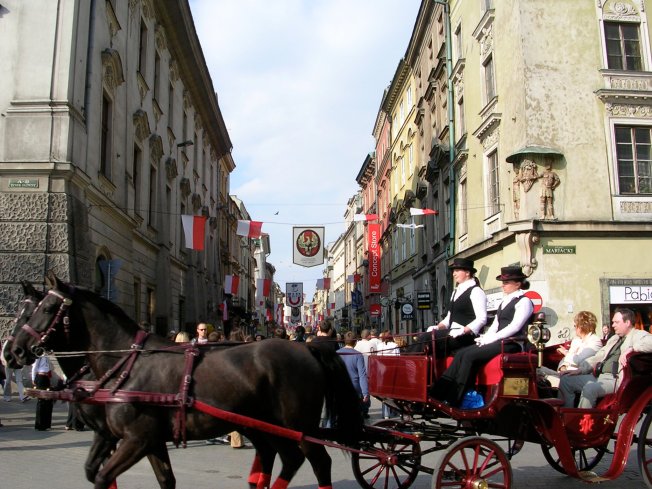