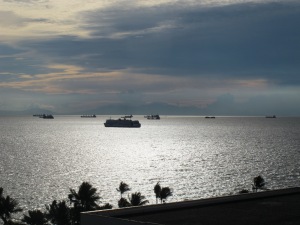 There are many places around the world known for beautiful sunsets. Pristine beaches, remote islands, rugged mountains, skyscraper-spiked cityscapes… Everybody has their favorite spot and so do I: the incredible evening light show over Manila Bay. I’m in good company. For one, General Douglas MacArthur who rose to the rank of the Philippines’ most beloved hero after first defending the country against the Japanese invasion during WWII – unsuccessfully – and then in 1945 freeing the islands from the brutal occupation and thus fulfilling his famous “I shall return” promise. Before the war, when he was the Military Advisor to the Commonwealth Government of the Philippines from 1935-1941, he made Manila Hotel his home. The hotel sits right on the bay and offers a great vantage point to admire fiery sunsets. MacArthur’s penthouse suite is still available for rent for… ugh, USD 2,500/night. END_OF_DOCUMENT_TOKEN_TO_BE_REPLACED 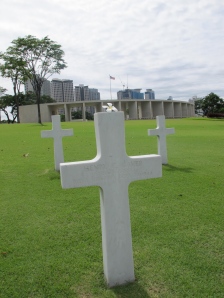 Memorial Day is almost here. I initially wanted to write something about the Arlington National Cemetery given that this is probably number one association most people make with commemorating this day. But there is another special place I want to talk about – a place I didn’t know existed until recently – the Manila American Cemetery and Memorial in the Philippines. The Cemetery is located in Taguig, Metro Manila, and occupies 152 meticulously landscaped acres on a high plateau overlooking the city. It contains the graves of over 17,200 soldiers who died in WWII fighting in the Philippines and New Guinea, which makes it the largest U.S. military burial site of that war. The horrors of the bloody 1941-42 Battle of the Philippines and the triumph of the eventual Allied recapture of the islands from the Japanese come together in this place like nowhere else. General MacArthur said “I shall return” when, defeated, he was fleeing Bataan. He kept his word but it took enormous sacrifice of American and Filipino troops to fulfill that promise.

For anyone who has been to the Arlington Cemetery this place looks oddly familiar. Same gleaming white headstones stretching in long, even rows. Same manicured, lush lawns. Same serenity and silence. But tropical trees and flowers break the spell, with sweet plumeria scent in the air. END_OF_DOCUMENT_TOKEN_TO_BE_REPLACED 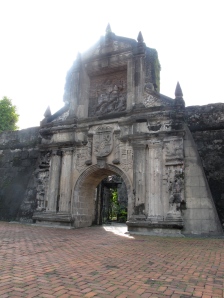 A recent visit to Mardid made me think of my trip to Manila back in June. Interestingly, just like Madrid, Manila – known then as Maynila – used to be a Muslim settlement until Spanish general Miguel López de Legazpi paid a visit to local ruler Rajah Sulayman in 1571 and established a colonial city. History of the Philippines from that point on was aptly described by Pulitzer Prize-winning journalist Stanley Karnow as “300 years in a Catholic convent, and 50 years in Hollywood.” He brilliantly spells out the details of Spain’s three centuries long dominion over the archipelago and America’s foray into a colonial adventure there in his book In Our Image: America’s Empire in the Philippines.

Even though I had never been to the Philippines before, Manila filled me with a strange sensation of multiple dimensions of déjà vu. First, there is the Spanish influence over architecture, especially in the historic district of Intramuros. Looking at the Manila Cathedral I had to pinch myself and kept repeating: “I’m not in Mexico, I’m not in Mexico.” Incidentally, during the Spanish colonial period that’s where the Philippines were administered from rather than by Spain proper. The Manila-Acapulco galleon trade route brought Far East riches to the Americas and flourished from 1571 until 1815, ended by the Mexican War of Independence. END_OF_DOCUMENT_TOKEN_TO_BE_REPLACED