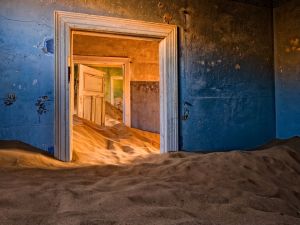 Today I found a fascinating post on BuzzFeed featuring photos of the 33 most beautiful abandoned places in the world. It’s hard to pick favorites but I have to say the one of the sand-filled house in Kolmanskop, a ghost town in the Namib Desert, is the most striking to me. The blues, yellows, and oranges are striking. And the multiple door frames captured in this shot make the image self-referential, reminiscent of the hall of mirrors.

It made me look through my own photo collection to find beautiful abandoned places I’ve come across. Here are my top five. How about you? Have you taken any photos of desolate yet striking locations that you’d have to share? If so blog about it and link back – which I guess would officially make this my first-ever travel theme post! END_OF_DOCUMENT_TOKEN_TO_BE_REPLACED

New Orleans is once again sobering up from the Mardi Gras madness. According to Mayor Mitch Landrieu, “to put it simply, Mardi Gras 2012 rocked.” With 97% hotel occupation rate and busy restaurants and businesses, that’s great news for the city still in the post-Katrina recovery. But those who are leaving NOLA (no doubt with a killer headache) right after Mardi Gras are missing out on some great places to explore beyond the French Quarter. One of those places is Algiers Point.

Anybody gazing across the Mighty Mississippi from Jackson Square has seen it on the other bank. Located directly on the other side of the river bend, Algiers Point is the second oldest neighborhood in the city and used to be a separate settlement until incorporation into New Orleans in 1840. All it takes to get there is just a short ferry ride – the same one featured in Denzel Washington’s 2006 movie Déjà Vu, nota bene the first major film to be shot in the city after its hurricane devastation. No worries, despite what you see in the opening scene the passage is quite safe =)

Crossing the Mississippi provides a whole new perspective on New Orleans. The familiar landmark of St. Louis Cathedral looks remarkable from the water, getting smaller and smaller as the ferry inches toward the Algiers shore. Algiers Point, the oldest part of the Algiers neighborhood, greets visitors with the stature of Louis Armstrong – and the atmosphere of a 19th century village, which can be a welcome respite from Bourbon Street’s din and debauchery. END_OF_DOCUMENT_TOKEN_TO_BE_REPLACED

New Orleans is an old, thick book that I’ve barely managed to crack open in my two (so far) visits there. But I love it, pure and simple, and can’t wait to get more of it. But then who wouldn’t? It takes one meal at Bayona, a few morsels of chargrilled goodness at Acme Oyster House, or a bite o’beignet at Cafe du Monde to want to stay forever. (Yes, there is a pattern here: a path to my heart often leads through stomach.) Most visitors never venture outside the French Quarter – and although there is surely enough there to keep you busy, there is definitely more to the city. Colorful shotgun houses and beautiful Holy Name of Mary Catholic Church are just a short ferry ride across the Mighty Mississippi in Algiers Point. Impressive mansions – including the house where Jefferson Davis died in 1889 – are only a streetcar-hop away in the Garden District. And then there are the cemeteries. Ancient white vaults, angels cast in stone, and faded names carved on weather-worn tombstones tell the story of generations past. St. Louis Cemetery #1, the oldest one in the city dating back to 1789, is the closest to the French Quarter. It’s just across North Rampart Street and yet ages away, stretching back to the time when this place was called Nueva Orleans. END_OF_DOCUMENT_TOKEN_TO_BE_REPLACED
Africa Armenia Asia California Central America China District of Columbia Europe Florida Germany Italy Kenya Louisiana Mexico Middle East and North Africa Nepal North America Peru Philippines Poland Senegal Serbia South Africa South America Thoughts Travel Tunisia UAE United States Vietnam