A boy at the Tillia-Kari mosque in Samarkand, present-day Uzbekistan, ca. 1910

I recently came across some amazing photos from a century ago in Russia that I just have to share! Sergei Mikhailovich Prokudin-Gorskii was an early pioneer of color photography, a skill he honed in his studio and laboratory in Saint Petersburg established in 1901. His most famous photo is the only color portrait of Leo Tolstoy but he’s also known for amazing images of early 20th century Russian Empire. Impressed with his work, Tsar Nicholas II sent Prokudin-Gorsky on a mission to document in color the country’s expanse and its inhabitants. He went on to create a rich collection photos – a real treasure chest of history. He emigrated in 1918 following the October Revolution and settled in Paris, where he lived until his death in 1944.

His technique involved a camera that took a series of three monochrome (black and white) pictures in quick succession, each through a different-colored filter: red, green, and blue. He then projected all three images together to obtain near true color. With a specially equipped railroad-car darkroom paid for by the Tsar and permits that granted him access to restricted areas of the Empire, Prokudin-Gorskii set out in 1909 to document the diverse landscapes and cultures of Imperial Russia. The results are amazing and the colors so vivid that it’s hard to believe these photos are hundred years old.

I find this one the most haunting, maybe because Armenia has been on my mind recently. Her focused gaze is truly piercing and the intense color and texture of the velvet front of her dress makes this image seem three-dimensional.

An Armenian woman in national costume on a hillside near Artvin (in present day Turkey), circa 1910

This photo almost looks like a painting – a portret permeated with quintessentially Russian spirit. Prokudin-Gorskii had a great eye for composition. Simple horizontal and vertical lines of the wooden house in the background creates a great, dynamic contrast with the colorful silhouettes of the girls. 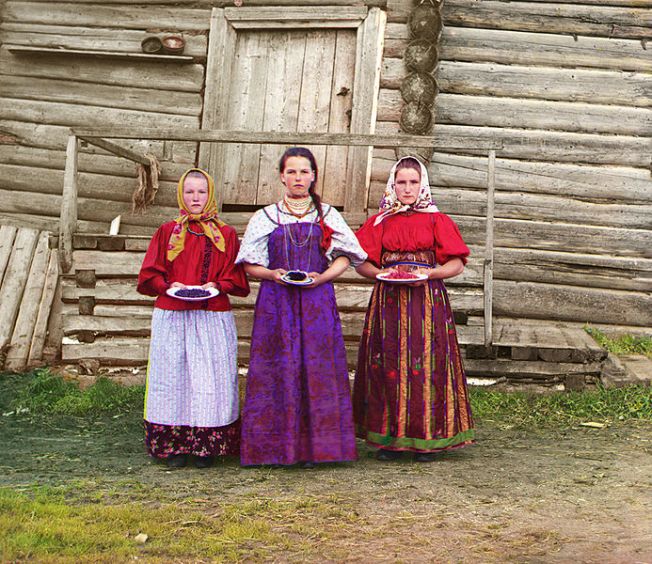 This woman is clearly wearing her best Sunday clothes and yet pretending to be hard at work for the posed photo. I love the contrast between pale yellow straw and bright red of her blouse.

The details of this photo are amazing – vivid blue of his regal coat, beautiful flower patterns adorning it, shining medals, golden belt, and impressive sword. This photo really should have been a large-canvas portrait for Emir’s Bukhara palace! 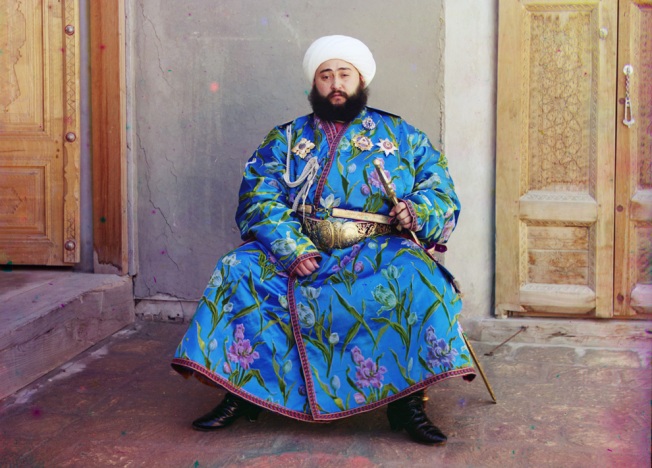 This beautiful Eastern Orthodox church seems frozen in time. I wonder if it’s still there? On the edges of the picture you can see that it’s a composite of several color-filtered images.

Although most of Prokudin-Gorskii’s works are portraits, landscapes, or photos of architecture from the bygone era, he has several that clearly show the dawn of the new, industrial age. Like this one.

These are just a few of my favorites but there are hundres more to see. The Library of Congress purchased the collection of Prokudin-Gorskii’s original glass plates in 1948. All the images have since been painstakingly recreated and digitized and are freely available online. Truly a tour of the lost world!