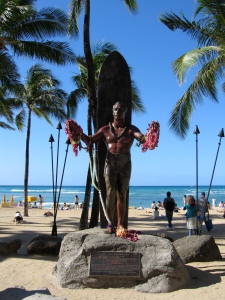 Hawaii is a mystical place that seems to exist in imagination only until you actually set foot on one of the volcanic outcrops in the middle of the Pacific. When I was growing up, Hawaii – or Hawaje in Polish – was a fairytale land far, far away. So far in fact that it might as well have been Oz. Who knew I would one day find it? And yes, as soon as the plane touches down, it’s clear that we’re not in Kansas anymore. The black-and-whiteness of mundane daily existence melts away in the Technicolor rainbow of verdant hills, turquoise waters, and golden sun, leaving newcomers temporarily blinded until their eyes adjust. I wonder if that’s the effect that sighting the islands had on the first European to set eyes on them, captain James Cook. On January 18, 1778, when he saw Oahu after months of sailing across vast and empty Pacific, wouldn’t Hawaii appear to be a slice of paradise put on his path by providence?

Fortunately, no comparably long periods of time are required of a modern traveler. But it’s still a looong trip from pretty much anywhere. In fact, Hawaii is the most isolated population center on earth: 2,390 miles from California; 3,850 miles from Japan; 4,900 miles from China; and 5,280 miles from the Philippines. It’s a strange feeling to fly for so many hours from the U.S. mainland and not need to pull out a passport. But once you’re here, you know you’ve arrived. A puff of warm tropical air penetrates the jet-way. The hot sun starts its labor of love on pale skins of temperate zone individuals. And the beach awaits. 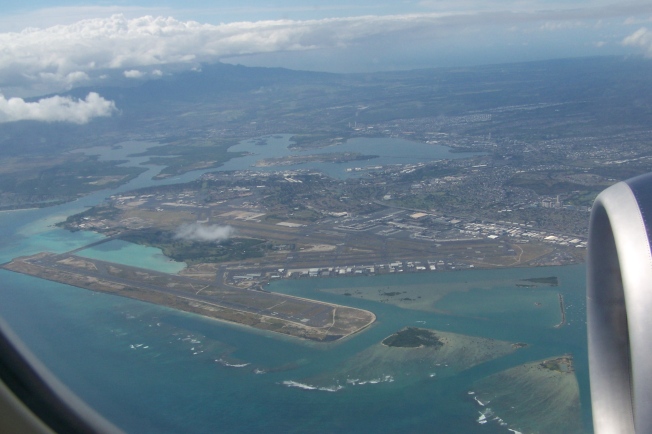 Honolulu from the air – almost there!

For most new arrivals in Hawaii the point of first contact is Honolulu. With its legendary Waikiki beach, nearby top snorkeling destination Hanauma Bay, world-famous restaurants such as Alan Wong’s (1857 S. King St, opihi aka local limpet to die for), or less famous but equally awesome Jinroku (2427 Kuhio Ave – great okonomiyaki, Japanese savory pancakes), and a magnificent backdrop of Diamond Head crater of an extinguished volcano, the city not surprisingly is a tourist magnet. But there is more to Honolulu than sunburn and mai tais. Among downtown high-rises and sandy beaches, pieces of this place’s turbulent history come to life. 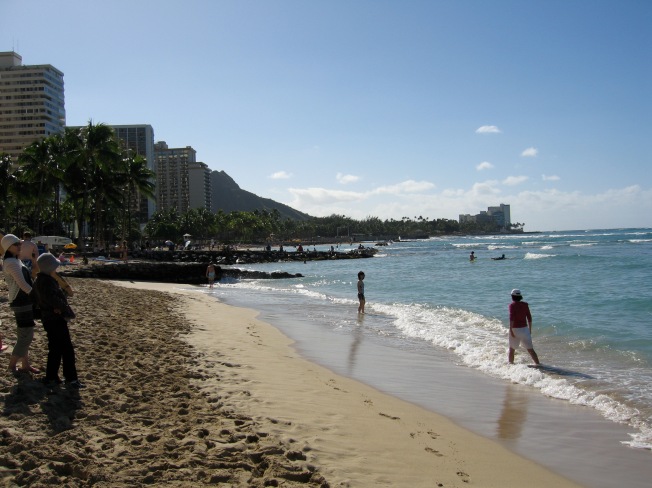 Waikiki beach with Diamond Head in the background 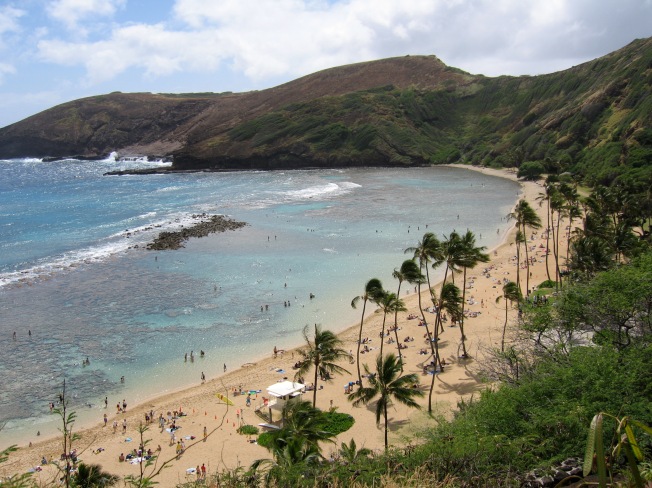 Before the Europeans came, the islands were ruled by monarchs descended from Polynesian sailors who settled here. King Kamehameha I united the islands after a bloody struggle in 1810 and Honolulu became the capital of the Hawaiian Kingdom in 1845 under Kamehameha III. All the while, foreigners meddled in local politics and migrated to the islands to spread Christianity – and sugar cane cultivation. In 1875, a treaty with the U.S. allowed for duty-free import of Hawaiian sugar in exchange for Pearl Harbor. But rather than strengthening the indigenous economy, the treaty incented even more settlers to come and make a fortune in Hawaii (which also translated into their growing political power), while native population dwindled largely due to diseases brought by the foreigners. When Captain Cook arrived, there were between 300,000 and 400,000 native Hawaiians. By 1878, the native population dropped to 40,000 – 50,000 people. Today, there are fewer than 8,000 pure Hawaiians, dwarfed in numbers by Filipinos, Japanese, Chinese, Koreans, Caucasians – and all of the above given that Hawaii has the highest percentage of multiethnic Americans of any U.S. state.

‘Iolani Palace – the only former royal palace in the U.S. 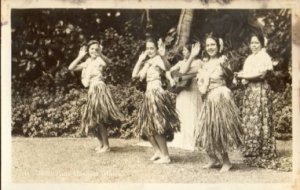 The last Queen of Hawaii, Liliʻuokalani, abdicated the throne in 1893 under the pressure of U.S. Marines presence and Hawaii was soon (1898) annexed by the United States. ‘Iolani Palace, in the shadow of a strangely modernist Hawaii State Capitol, is all that remains of the time of monarchy. For a more in-depth treatment of the subject I recommend Sarah Vowell’s Unfamiliar Fishes, written with her trademark dry wit and dark humor. The title comes from David Malo, a 19th century Native Hawaiian historian, minister, and author who said: “If a big wave comes in, large and unfamiliar fishes will come from the dark ocean, and when they see the small fishes of the shallows they will eat them up. The white man’s ships have arrived with clever men from the big countries. They know our people are few in number and our country is small, they will devour us.” Not always a pretty picture. And a word of caution to anyone who may take religious offense: she’s not a big fan of missionaries. Among other things, they forced native women to wear long-sleeve high-neck dresses called Mother Hubbard, or holokū in Hawaiian, instead of more traditional – and scant – attire. In this climate?!? That clearly could not have been God’s will =)

But who can blame the missionaries, or any other visitor to this place for that matter, for wanting to stay and make it their own? Once Hawaii has a grip on you, it never lets go. For one, that was the case for an heiress to a massive tobacco and energy fortune, Doris Duke, who came to Hawaii on her honeymoon in the 1930s. She was supposed to stay for 2 weeks – instead stayed for 4 months and had been coming back for decades to an island escape she built herself on the outskirts of Honolulu. It’s called, appropriately, Shangri La and well worth a visit. Beautifully located right on the ocean and next to Diamond Head, the property is now open to the public and contains Doris’s vast and impressive collection of Islamic art, which was another passion she picked up during her world travels. 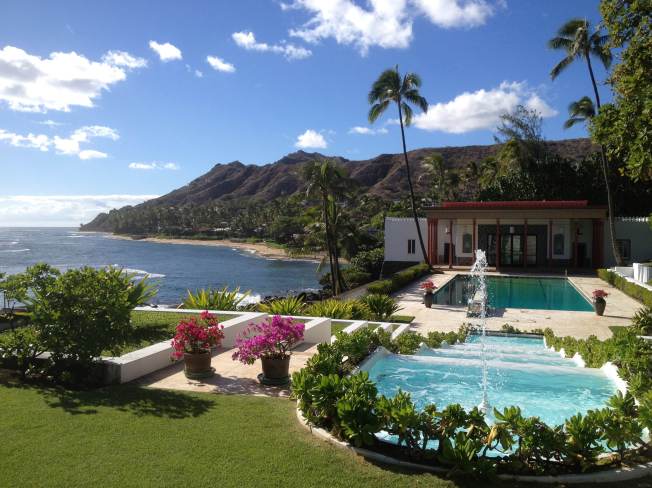 So whether it’s your first time in Honolulu, or you’ve visited every ABC store there is in your numerous trips (and they are everywhere!), one thing is for sure: it’s always good to be back, and there is certainly always more to discover. 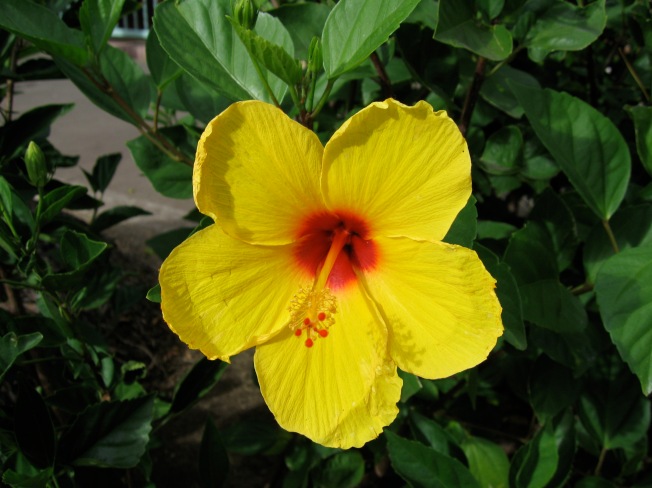 Hawaiian hibiscus – until next time!