On December 5, 2013 the world bid farewell to one of its modern-day heros: South Africa’s Nelson Mandela. His compelling life story, amazing capacity to forgive and reconcile, and exceptional leadership during a pivotal period in his country’s history made him an icon. His death gave all of us a moment to pause, mourn – and at the same time celebrate his achievements in the successful struggle to end apartheid. These words from his 1994 inaugural presidential address come to mind:

Out of the experience of an extraordinary human disaster that lasted too long, must be born a society of which all humanity will be proud. (…) The time for the healing of the wounds has come.
The moment to bridge the chasms that divide us has come.
The time to build is upon us.

I’ve never met Nelson Mandela and yet I feel like I got to know him in a special way. On my first ever trip to Africa, back in 2001, I visited the amazing city of Cape Town, one of the most captivating places on earth. Cradled in the shadow of Table Mountain‘s huge, unreal silhouette, Cape Town fascinated me deeply – its history, its natural beauty, its contrasts. The top of Table Mountain, easily accessible by a cable car, is a perfect spot to take it all in from above… One place in Cape Town in particular, just offshore, made a lasting impression: Robben Island – a place where Nelson Mandela spent 18 of the 27 long years of his imprisonment.

Contemplating Cape Town from the top of Table Mountain 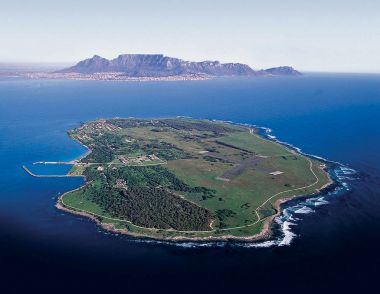 Robben Island is a rocky outcrop just a short ferry ride away from Cape Town’s posh Victoria and Albert Waterfront but it may as well be hundreds of miles away from the busy urban life. The island, today a UNESCO World Heritage site, was a prison for much of its history since the Dutch settled the Cape area in the mid-1600s. At different times it also served as a hospital, a mental institution, a leper colony, and a military base. Finally in 1997, three years after the fall of the apartheid, it became a museum.

Mandela is unquestionably Robben Island’s most famous inmate. He was there from 1964 until 1982, living in a 7-by-9-foot cell, toiling with fellow political prisoners in a lime quarry, and imagining a better future for his country. At the time it must have seemed so hopeless and so frustrating – just like seeing Table Mountain in the distance.

The mountain’s distinct shape appears so clear from Robben Island and it seems so close that one could almost touch it. But for Nelson Mandela and his imprisoned companions it must almost have felt like a mirage, an unattainable dream… 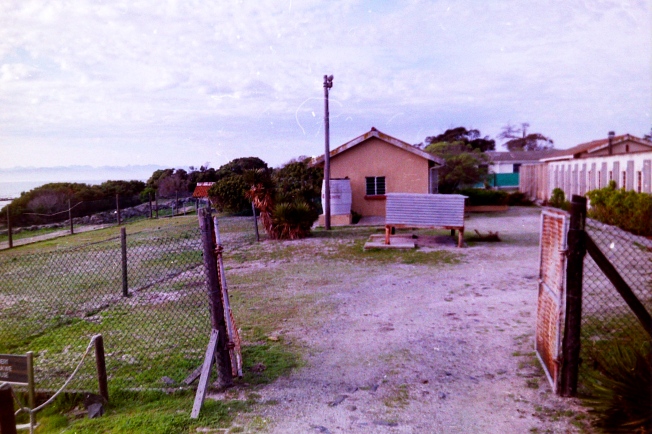 “I could walk the length of my cell in three paces. When I lay down, I could feel the wall with my feet and my head grazed the concrete at the other side. (…)

Prison not only robs you of your freedom, it attempts to take away your identity. Everyone wears the same uniform, eats the same food, follows the same schedule. It is by definition a purely authoritarian state that tolerates no independence or individuality. As a freedom fighter and as a man, one must fight against the prison’s attempt to rob one of these qualities.”

Outside of the prison walls strangely there is captivating beauty on Robben Island despite its violent and oppressive past. In some ways it feels like a secluded monastery. In others, like a nature preserve thanks to a lively colony of African penguins that peek curiously at visitors and are not at all camera shy. I bet the sight of these cheerful creatures brightened Mandela’s darkest days on Robben Island!

By the way if you’re wondering why all my photos look like vintage 1970s shots, there is a good reason for that. Thanks to an early Christmas gift – a dbtech film and slide scanner – I was able to capture my South African memories electronically 12 years after that trip. The device is easy to use and I’m reasonably happy with the quality, just need to clean the negatives better. If you have old film strips lying around, don’t give up on them and get scanning! It’s labor intensive but what better way to enjoy the holidays than leisurely sorting through pre-digital camera moments =)