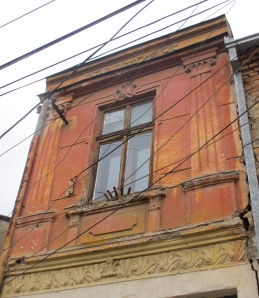 “March snow swirled across the ancient city of Prizren. Churches and mosques blend here in perfect harmony against a backdrop of narrow hill-climbing alleys, tiny coffee shops, barbers, old-style draper’s shops and jewelers specializing in the delicate filigree work that Albanians love so much. In his office a prosperous Albanian businessman said that if people would just get on with producing things and making money then ‘we would not be in the situation we are now.’”

That was Prizren seen through the eyes of journalist Tim Judah who witnessed first-hand the upheavals of the war he described in his great book Kosovo: War and Revenge. When I was there it was April rain rather than March snow drizzling upon the ancient city. But otherwise the landscape looked the same. Like many places, Prizren has its iconic view that captures both a key landmark and something intangible, a soul of sorts. There is a spot on the banks of the Bistrica river where the old stone bridge perfectly frames such postcard-worthy vista: 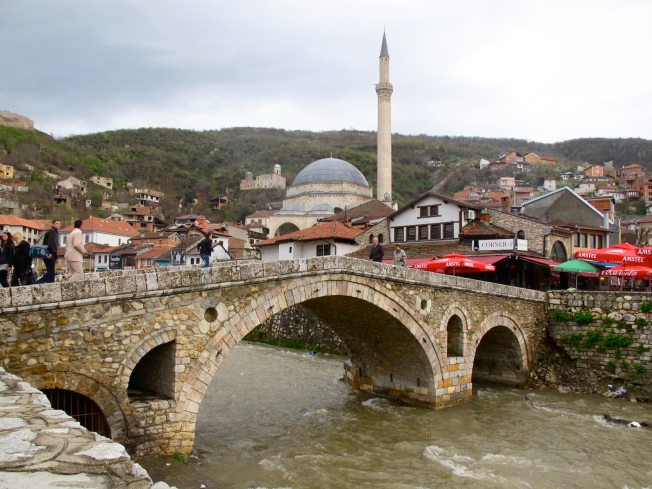 History, both ancient and recent, is layered in this image. Against the backdrop of the Sharr Mountains, a slim minaret of Sinan Pasha Mosque points skyward as it has been since 1615. On the hilltop to the left ruins of the 11th century Prizren Fortress (Kalaja e Prizrenit), first erected by the Byzantines, look over the city. And in the background, seemingly right next to the mosque, stands the 14th century Serbian Orthodox Church of the Savior – or rather what’s left of it after the damage sustained in 2004 ethnic clashes. Not so picture perfect after all…

Over the ages, Prizren has combined many cultural and religious influences and it does today to a degree, even though most Serbs left. Still, the city’s population is surprisingly heterogeneous comprising substantial ethnic Turkish, Slavic Muslim (Bosniak), and Roma minorities. The 1999 war and its aftermath is just the latest chapter in Prizren’s long and often troubled history. It was once a stronghold of the Byzantine Empire, the center of the Serbian Empire in the Middle Ages, the heart of Ottoman Kosovo after 1455, a cultural and political capital of Kosovar Albanians where the League of Prizren was created in 1878 to seek Albanian independence from the Ottoman Empire, and a site of the modern Serbian-Kosovar conflict. All these influences and legacies, glorious and painful alike, mix and mingle along Prizren’s narrow streets.

Gazi Mehmet Pasha mosque, the oldest one in Prizren (1561) 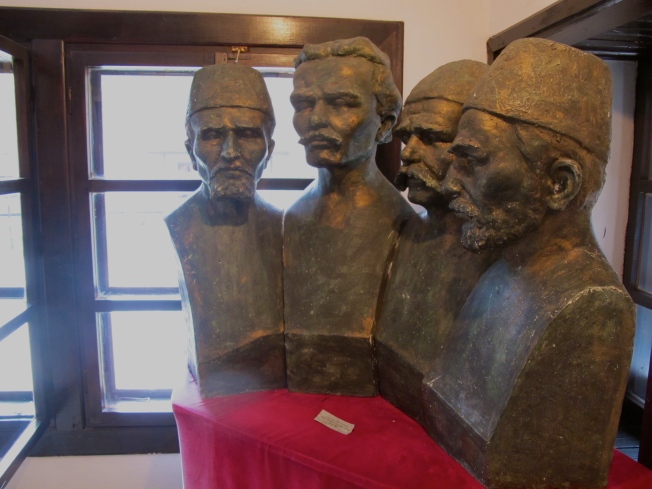 “Founding fathers” in the Albanian League of Prizren Museum

All visitors notice that Prizren has a very different vibe from Pristina. The capital is dominated by esthetically challenged soc-realist architecture. Prizren feels very much the opposite. 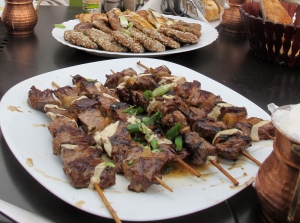 Steeped in history, the city is full of charming – if somewhat crumbling – houses, and teeming with artisan shops and culinary gems such as Turkish kofte grilled sausages, boza – sweet-sour drink made from corn flour, amazing pastries, and a really great yoghurt drink the taste of which I will never forget but its name unfortunately escapes me.

Then there is filigree, or filigrani as it is known in Kosovo – ancient craft that uses fine, mostly silver and gold threads soldered together in fancy shapes to create intricate lace-like jewelry, accessories, and crafts. The tradition of filigree in Kosovo apparently dates back to the 15th century and there are about 200 small-scale filigrani family businesses in and around Prizren, passing on the trade from generation to generation. If people would just get on with producing things and making money… 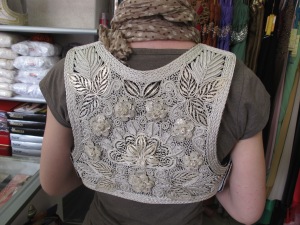 Beyond the turbulent recent decades, Prizren boasts a proud history of a different kind, a history that united people who’ve lived here for ages: a long and distinguished tradition of crafts – not to mention great food that inevitably comes with ethnic diversity. Unfortunately the legacy of war and violence continues to overshadow Prizren’s deeper heritage. To quote a fellow blogger, “Quite often, it is the stigma of war, not so much the conflict itself, that can have devastating effects far surpassing those of bombs. It is the fear of fighting that scares away investors, developers and tourists. Kosovo is no stranger to both war and the reputation that comes along with it. For now things are calm. The situation is at times tense, but secure. But one city in the south-west of the country, Prizren, is a ticking time bomb of a different kind. Prizren did not suffer as much as other parts of the region during the Kosovo War of 1998-1999. Instead, it is an explosion of another kind I speak of. Prizren is a powder keg of tourism ready to erupt.”

I hope so, too. After a long stretch of rain that at times turned into deadly storms, Prizren deserves a rainbow.