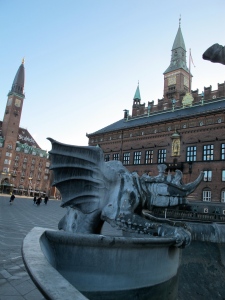 Even from a quick glance it’s abundantly clear that Copenhagen is – and has been for centuries – the place of commerce. Copenhagen is located on a busy maritime route between the Baltic and the North Sea. Its name in Danish, København, means “merchants’ harbor.” Indeed since the city’s beginnings in the 11th century as a humble fishing village Kopenhagen has been attracting economic activity with its excellent natural harbor and rich fisheries.

The most photographed place in the city, 17th-century canal and waterfront called Nyhavn, features picturesque houses of merchants and historical wooden ships that once used to carry trading goods. Constructed by King Christian V, Nyhavn became the key gateway from the sea to the inner city center, Kongens Nytorv, or King’s Square, where ships unloaded cargo and fish. Today Nyhavn is a great place for people watching and to grab a tasty bite. Don’t miss smørrebrød, a Danish version of sandwich but I’d say it’s more accurately described as an excuse to put a whole lot of delicious stuff on a slice of bread. Many places offer great smørrebrød throughout the city, it’s not hard to find. The one I enjoyed just off Nyhavn was Cafe Brooklyn (Toldbodgade 3).

Continuing with Copenhagen’s commercial heritage, another place not to miss is Børsen, a gorgeous Dutch renaissance style building constructed by King Christian IV in the early 17th century. It was built to house the stock exchange, reflecting the growing importance of commerce in the country’s economy and in the life of its capital city. The most impressive part of the building is the dragon spire – four intertwined dragon tails topped by three crowns symbolizing the empire that spanned Denmark, Norway, and Sweden. Børsen housed the Copenhagen Stock Exchange until 1974. END_OF_DOCUMENT_TOKEN_TO_BE_REPLACED