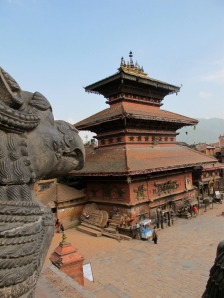 Just like its sister cities, Bhaktapur boasts an impressive Durbar (Palace) Square anchored by the Palace of 55 Windows built in 1427 and adorned by a masterpiece of woodcarving – a balcony with 55 elaborate windows. The statue of King Bhupatindra Malla, who remodeled the palace in the 17th century, faces the edifice on a tall column. The palace remained the seat of the local Malla king until 1769 when Nepal was unified under the Shah monarchy. It now houses the National Art Gallery, with the entrance flanked by two guardian stone lions. Nearby, the magnificent Golden Gate or Sun Dhoka opens to the inner courtyard of the Palace of 55 Windows, stunning visitors with a masterful frieze featuring Hindu deities set against the red brick entryway and surrounded by the white palace walls. 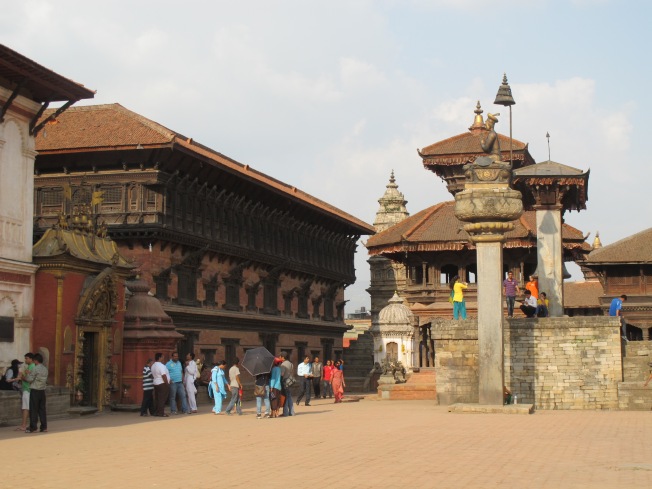 Palace of 55 Windows, the Golden Gate, and the statue of King Bhupatindra Malla 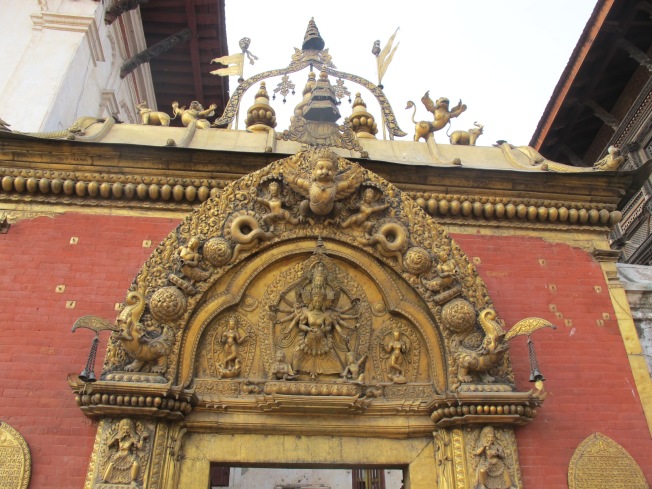 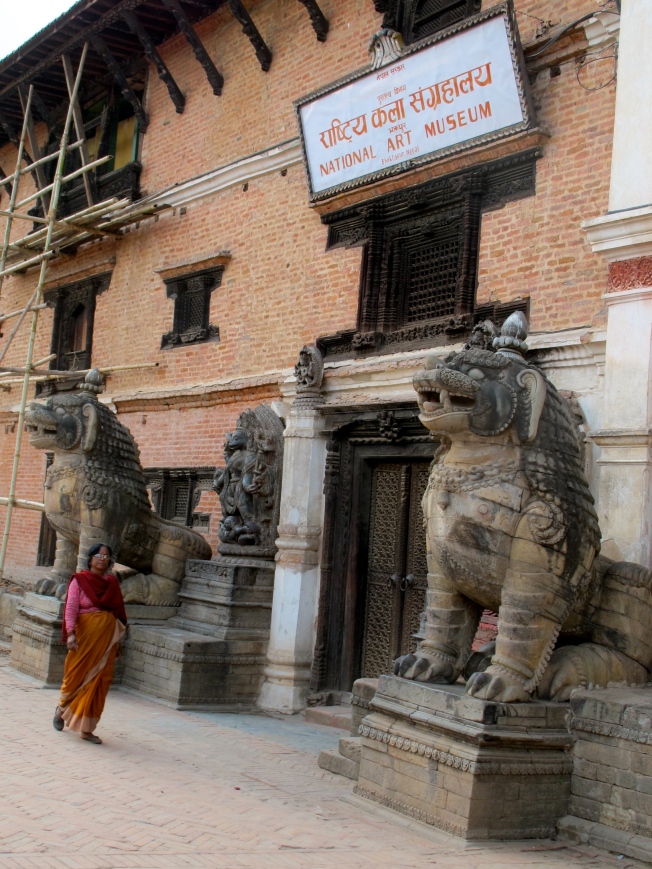 Near the palace there is a beautiful water tank called Naga Pokhari that once was the bathing basin of the Malla kings and is still used for the ritual immersion of the idol of the goddess Taleju, the royal goddess of the Malla kings. A temple dedicated to her is located in the palace courtyard but only accessible to Hindus. The pool is encircled by an elaborately carved stone cobra. 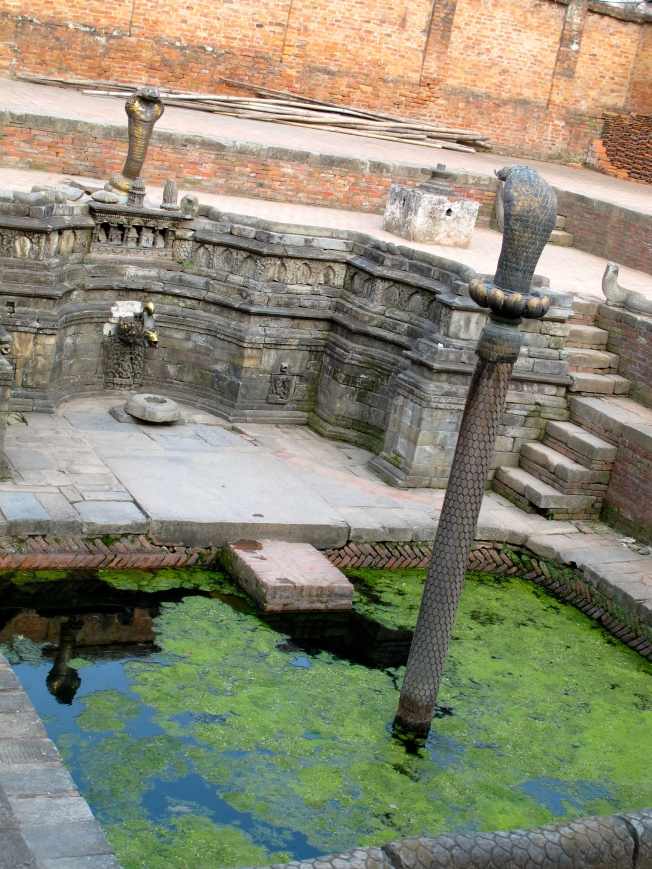 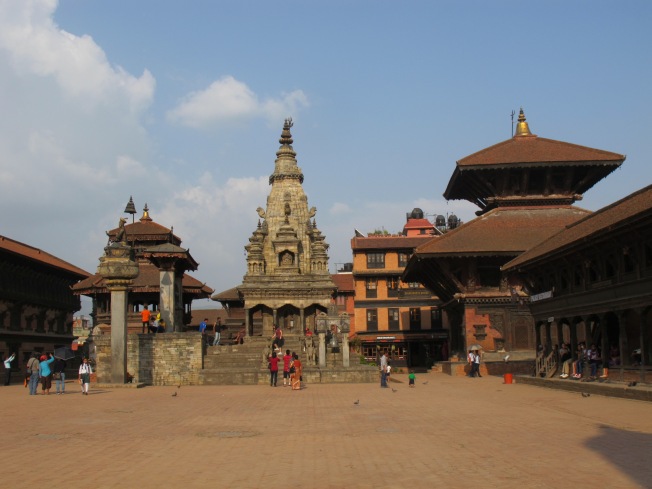 Compared to Kathmandu’s or Patan’s Durbar Squares, Bhaktapur’s one feels more open – and emptier. It wasn’t always like this. The square was once much more densly architecturally packed but many structures were destroyed by the 1934 earthquake that devastated Nepal. Here is how Nepali Times described what happened: 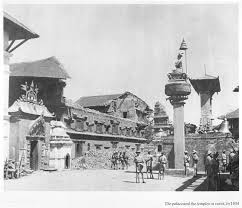 Bhaktapur after the 1934 earthquake (Image: thecosmosphere.com)

It was sunny winter afternoon, bright blue sky and a slight breeze from the west. Most families in Kathmandu were on their roof terraces, or in the fields. Suddenly, birds took flight, dogs started howling, there was a deep underground rumble, fields started undulating like waves on the ocean, houses crumbled, long fissures appeared on the roads and a great pall of dust rose over the city. Within a minute, 17,000 people were dead in Nepal and northern Bihar, many of them in Kathmandu Valley.

Fortunately, many of Bhaktapur’s architectural treasures have since been restored largely through the efforts of Bhaktapur Development Project launched jointly by the government of Nepal and Germany. The project lasted for 17 years (1974 – 1991) and gave the city a much-needed boost.

A short walk from Durbar is Taumadhi Square with Bhaktapur’s crown jewel: stunning Nyatapola Temple. The temple, dedicated to Goddess Siddhi Laxmi and dating back to 1702, is an impressive five-story structure, which makes it Nepal’s tallest pagoda. Its steep staircase is adorned with massive figures of Malla wrestlers and elephants, and its 5-level roof rises to the skies seemingly emulating the surrounding Himalayan peaks… 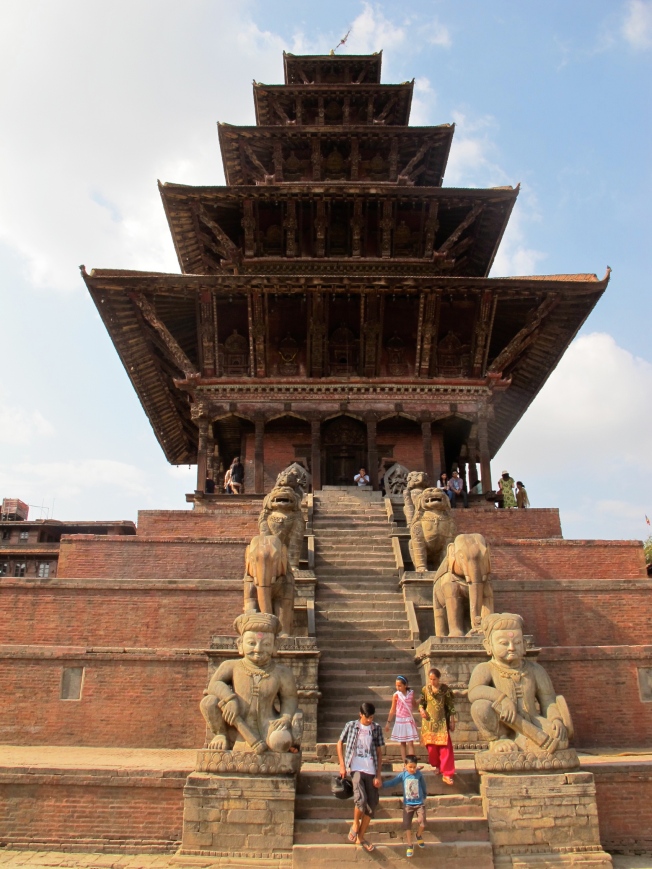 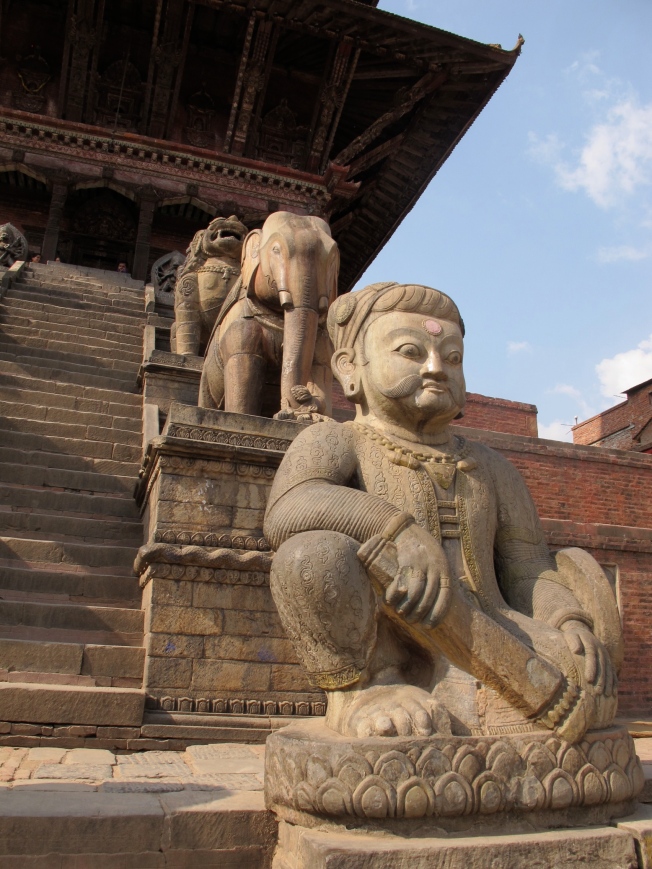 Close-up of the Nyatapola stairs

Next to the Nyatapola Temple is the three-storied Bhairavnath Temple devoted to Bhairab, the ferocious manifestation of Lord Shiva. Destroyed by the 1934 earthquake, the temple was rebuilt in 1995. 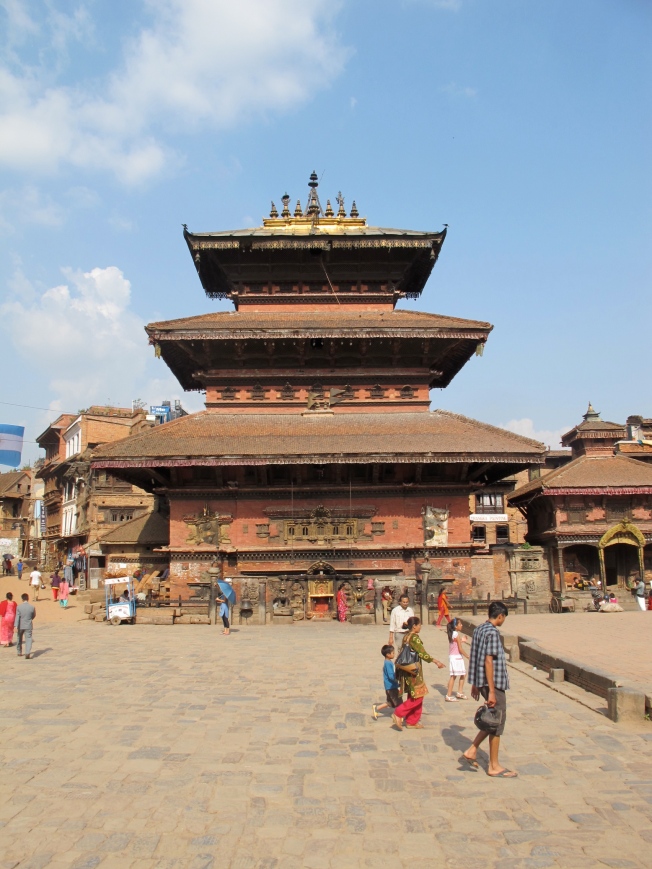 Both Bhairavnath and Nyatapola temples are best admired from a balcony the Nyatapola Cafe. In addition to breathtaking views of the Taumadhi Square, the cafe offers local delicacy called ju ju dhau or king curd. Indeed the taste is royal! 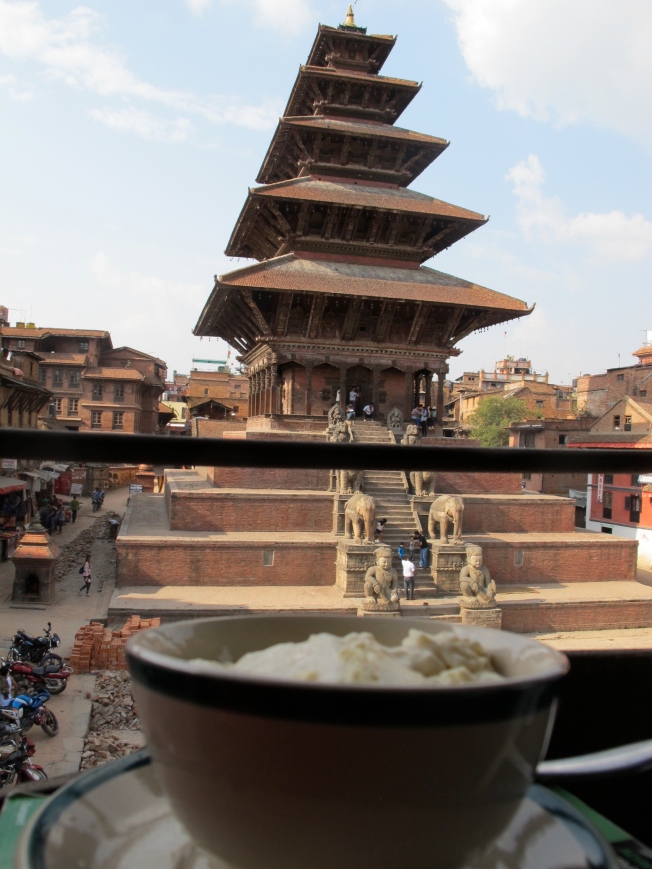 Ju ju dhau at Natyapola Cafe – dessert with a view

Bhaktapur, especially compared to Kathmandu, charms with its relative peace and quiet. There are no rickshaws or taxis allowed inside the city, which makes for some idyllic walks along its temple-studded squares and narrow lanes. Reinforced by heavenly ju ju dhau you should head for Bhaktapur’s another special place, Potters’ Square. It is pretty much what it sounds like – a square filled to the brim with pottery-making in various stages of progression. It is a fascinating process to watch and a great place to pick something to remember Bhaktapur by. 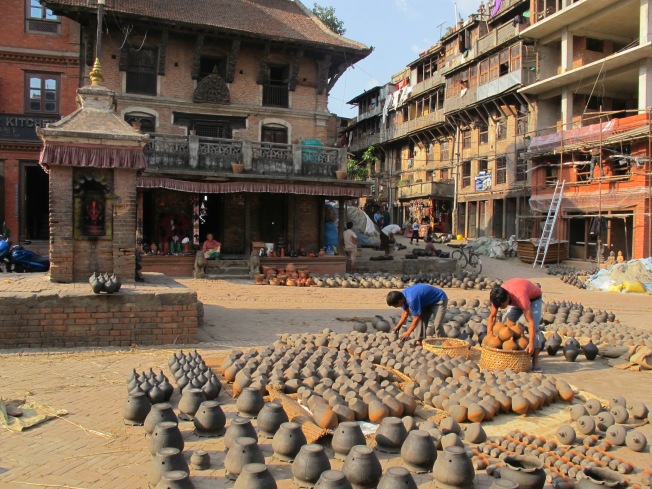 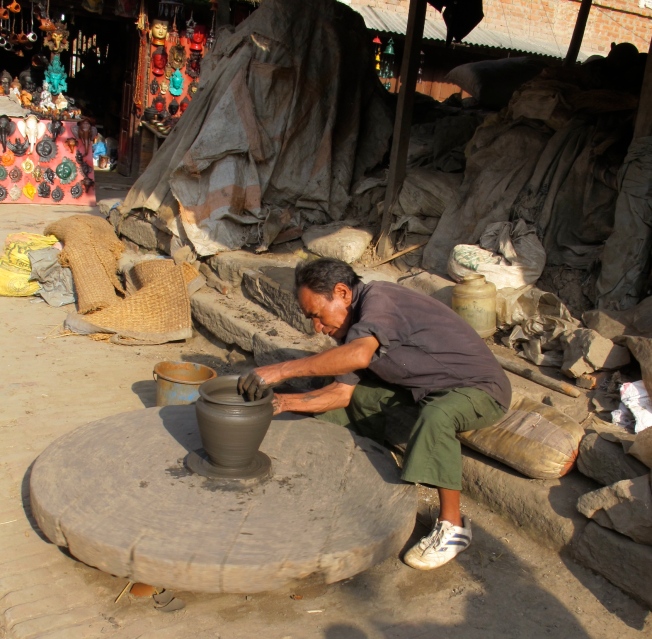 …and this is how it’s done

Words and photos can only capture so much… For a more immersive experience, enjoy a walk through Bhaktapur courtesy of Jeromet Ryan!