Listening to NPR this morning took me back to Kenya, musically speaking. When I was there last year I asked a friend to point me to popular music that young people listen to (other than Britney Spears and like =). Among the mix he recommended were songs by Sauti Sol, a great Afro-pop band that dazzled Kenya’s music scene in recent years. Bien-Aime Baraza, Delvin Mudigi, Willis Chimano, and Polycarp Otieno used to sing together in a high school gospel ensemble. In 2009, they released their debut album, Mwanzo, and became widely successful. They sing about everyday things – family, love, even education – but also about darker topics like police harassment. Their unique style reached receptive audiences in Kenya and beyond. Listen to this and you’ll know why:

Their music has stayed with me ever since. As did Nairobi. The city often gets a bad rap and earned an unflattering nickname “Nairobbery” some years ago. That’s not surprising in many ways given the gap between haves and have nots. But then again, Washington DC was known as the “murder capital” back in the 1990s for similar reasons. My personal experience in both cities hasn’t been that bad =) In fact, I had a great time in Nairobi, meeting wonderful people and discovering special places.

Fairview hotel – an oasis of tranquility

Serendipitous discoveries started in my hotel, beautiful Fairview. It is a unique slice of tranquility among the urban buzz. Meticulous grounds, poolside dining, and fresh lemon verbena leaves for my morning tea – can’t ask for more! But then… I noticed the owner’s name: Szlapak. Hmm, that’s definitely not Swahili. An unexpected Polish connection! Indeed, reading more about the hotel’s history I learned that the Szlapak family arrived in Kenya from Poland in 1938 and soon became well established in the business. Fairview, acquired by the current manager’s grandparents in 1946, has been owned and operated by three generations of the Szlapak family. Karibu – witamy – welcome!

Beyond Fairview’s hospitable walls Nairobi is a city of contrasts. Tall downtown office buildings, Western-style hotels, streets gridlocked by nice cars… Tourists flocking to Nairobi National Park for a quick safari, visiting friendly inhabitants of the Giraffe Center, or tracing Karen Blixen‘s footsteps in her former house turned museum… That’s one Nairobi. Kibera – one of the biggest slums in the world where hundreds of thousands of people live squeezed in shacks on just 6 percent of the city’s land – that’s another face of Nairobi. Both are unexpected and surprising in their own ways.

These are a few places that made Nairobi special for me.

Uhuru means “freedom” in Swahili and one of the most recognizable landmarks of Nairobi is the Uhuru Park named in memory of Kenya’s 1963 independence from Britain. It is Nairobi’s version of Central Park with green lawns and an artificial lake. Like Central Park, it has also been the site where history is made. In 1989, for one, the park was a site of civic protests led by Nobel Peace Prize winner Wangari Maathai over the government’s plans to build 60-plus story complex there. Thanks to Maathai’s activism, former President Daniel arap Moi relented and Uhuru Park was saved. 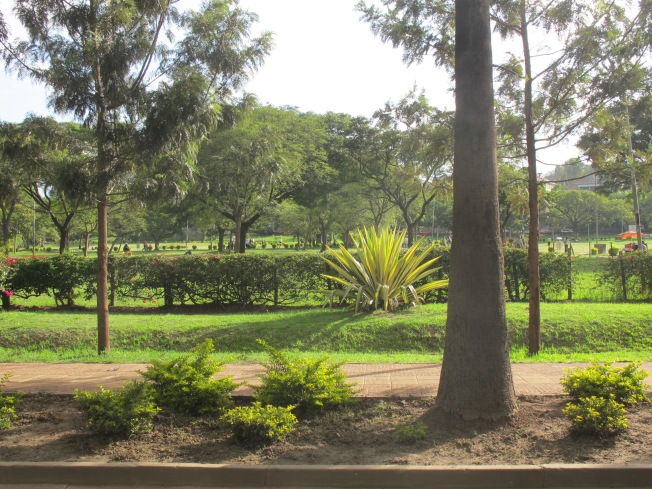 Then there is the Nairobi National Museum, a great place to learn more about Kenya’s history and culture. Aside from the impressive collection, the Museum grounds are equally engaging: outdoor sculpture, nature trail, and even a Snake Park!

And who can forget a close encounter with a giraffe? Away from the hustle and bustle of downtown Nairobi, in the south-western district of Langata, there is a place where giraffes can be easily found and safely approached. The African Fund for Endangered Wildlife Kenya limited, also known as the Giraffe Centre, was created in 1979 by Jock Leslie Melvile and his wife Betty as an educational institution also dedicated to rescuing the endangered Rothschild giraffes. The Centre provides educational programs, lectures, and opportunities to interact with giraffes.

Up close and personal

The Centre also borders a Nature Sanctuary of approximately 95 acres of indigenous forest that is a remnant of the forest that once surrounded the city. Close encounters there include butterflies, dragonflies, caterpillars, birds, warthogs, monkeys, and sometimes also leopards and hyenas.

Now onto Kibera… While not on most tourist itineraries, Kibera is an important part of Nairobi, if often overlooked by visitors and local authorities alike. Kibera can be shocking and depressing. Poorly constructed, crowded shacks line muddy alleys, residents sort through the heaps of uncollected garbage in search of anything still useful, and access to basics such as water and electricity is limited with predictable results in terms of the living standard. But that’s not all there is to Kibera.

Kibera is also a place of hope. Immigrants from across Kenya come here in hope of a better life, even if it remains unrealized for most. And there are places such as Red Rose School where children who otherwise would have no access to education have a chance for a better future. Entrepreneurship flourishes on every street corner, from a cow bone jewelry shop to my favorite: a craftsman who makes custom-ordered flip flops with soles made out of recycled tires. If only all this creative energy were channeled into the formal economy, Kibera could be Nairobi’s economic hub one day! 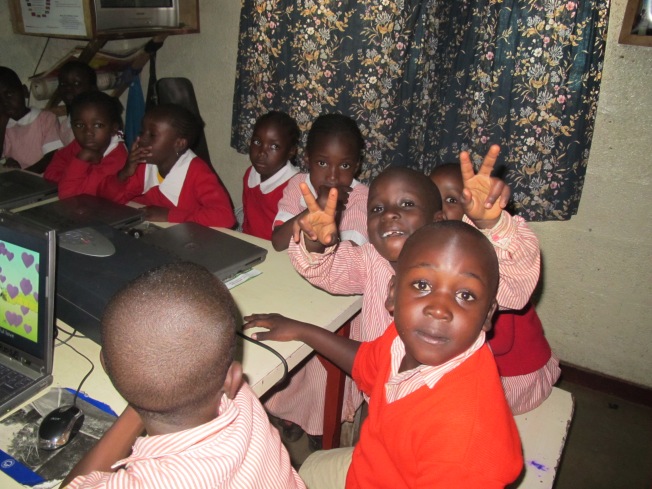 Nairobi for sure is a complex mosaic. Urban yet close to nature. Crowded and quiet. Rich and poor. Troubled but hopeful. Young. It was a good host to me and to over 3 million Kenyans it simply is one thing: home, for better or worse. Let Sauti Sol – the sunny sound of Nairobi – have the last word…