Just a short distance south of Frankfurt near the border between the German states of Hessen and Baden-Württemberg lies charming town of Heppenheim, population 26,000. The town is picture perfect with its medieval street layout, impeccably preserved fachwerk (half-timbered) houses, and romantic ruins of an 11th century castle. It is also a renowned stop on Hessische Bergstraße – the Hessian Mountain Road – a wine region famous for its Riesling grape. The city center, Großer Markt, despite its name (Big Market) is compact and cozy. The 18th century Town Hall and old chemist’s shop Liebig-Apotheke overlook the square, which is anchored by a beautiful fountain topped with a historic sandstone statue of the Virgin Mary. But looking up offers an even more rewarding view: high on the hill green with vineyards sits ancient Starkenbug castle. Simply a delightful setting to sit back, relax, and enjoy a glass or two (or three =) of Heppenheimer Stemmler, great local wine.

Walking through the town’s narrow streets further reveals its medieval character. Schunkengasse, leading west from the Main Square, is a collection of gorgeous 17th and 18th century houses and connects to a parallel Kirchgasse through a steep set of stairs dating back to 1888. After a short climb up, massive Catholic church of St. Peter appears, also called Dom der Bergstraße or the Bergstraße Cathedral. The first documented mention of Heppenheim references the predecessor of this church already in 755, during the Frankish era. 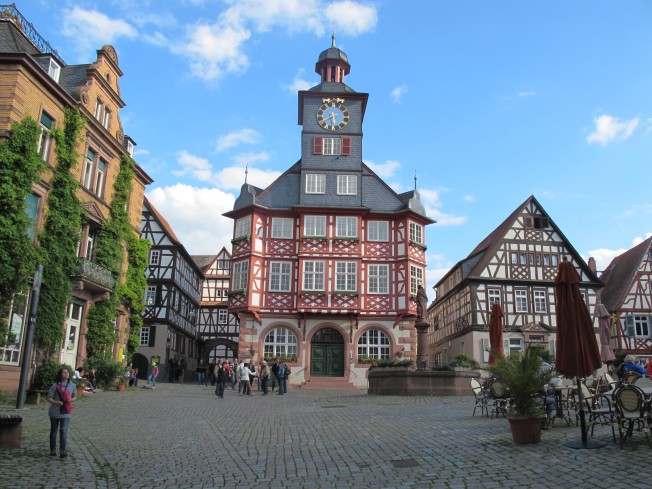 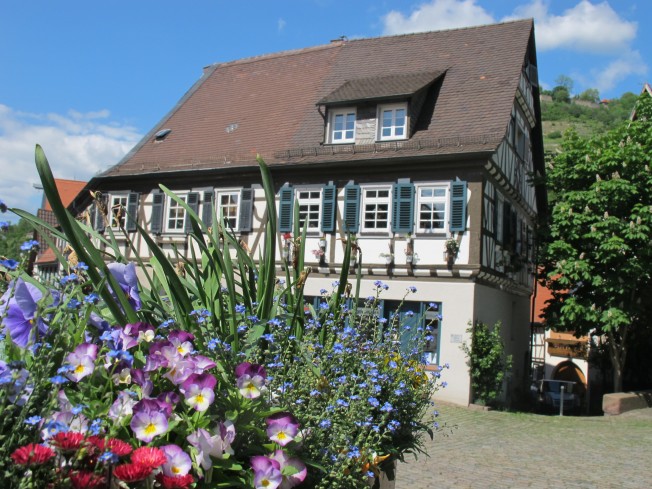 St. Peter’s church – the Crucifixion scene dates back to 1755

Less than two decades later, in 773, Charlemagne donated the town and surrounding areas to the nearby Lorsch Abbey. As the importance of Heppenheim grew, the Abbott of Lorsch in 1065 built what remains the town’s hallmark until today: Starkenburg castle. The castle and the town were then acquired by Archbishop of Mainz in the 13th century and the Archbishop’s court – Kurmainzer Amtshof – has been preserved as the Museum of Local History and Folklore. 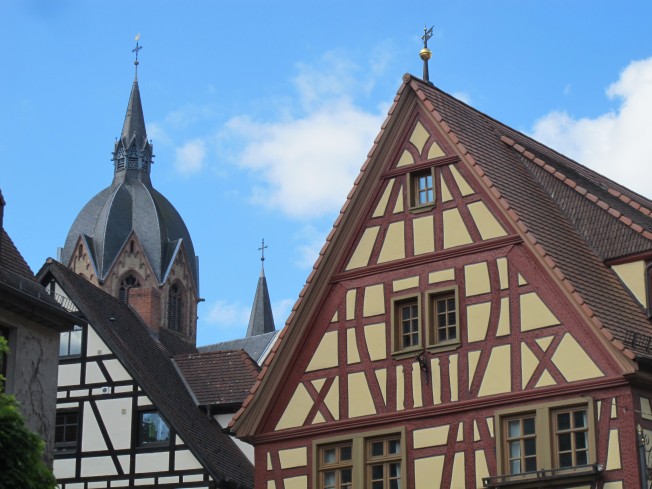 View of the Starkenburg castle hill

Climbing the 295-meter-high Schlossberg hill up to the Starkenburg castle is quite a workout but well worth it. You can’t beat the view of the town from the way up and the castle ruin itself is a wonder. The castle endured numerous military occupations, most notably during the Thirty Years War when it was captured by Spanish troops in 1621, and nine years later by the Swedes forces. The city was then decimated by a plague epidemic in 1635 and subsequent repeated plunders by foreign armies. Those events set off a downward spiral for the castle that accelerated when the Mainz Archbishop’s garrison withdrew in 1765 and three years later a lightning strike started a devastating fire. It wasn’t until the 19th century that restoration work began although a part of the castle – its keep, or fortified tower – had to be demolished in 1924 due to the danger of collapse. A new keep was built and other parts of the castle restored and some of them put to novel use. Today its grounds include a youth hostel and a cafe with an unmatched view of Heppenheim. 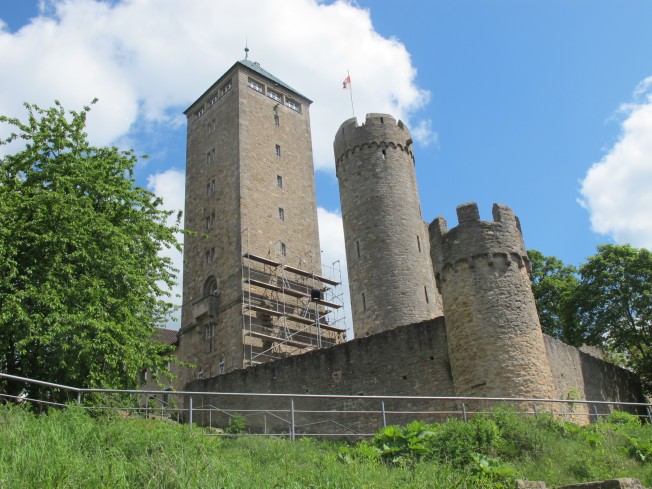 During my short time there, I learned four more interesting if somewhat random factoids about Heppenheim (in no particular order of importance =)