A sleepy town of Nazca - gateway to the Lines

The Nazca Lines, those mysterious shapes scratched in the scorched surface of southern Peru’s desert, are one of the most famous UNESCO-listed destinations in the world. So what new can be said about them? Perhaps not much in a way of new facts or learning, given that fundamentally we just don’t know much about who made those impressive geoglyphs and why. All we know is that they were etched in the face of the earth between 500 B.C. and A.D. 500 by a mysterious civilization that used them for ritual, perhaps religious functions. One explanation I heard is that they were used for ritual processions asking the higher-ups for rain, which is not a surprising plea in this arid place. Or was it the aliens – a theory advanced by Erich von Däniken’s 1968 book The Chariots of Gods? You choose the version you want to believe =) But visiting the lines for everyone is a new, unforgettable experience.

The name Nazca likely comes from Quechua “nanasca,” which means “pain and suffering.” Yup, it doesn’t rain much here and that hurts, but it’s precisely what helped preserve the lines for centuries – the dry, windless climate of this spot. The lines themselves were formed by removing the top layer of reddish pebbles and exposing the lighter-colored desert surface beneath. That simple. But few people see them from the ground level since the best vintage point is from the air (hence the theories of the lines being alien landing strips or navigation markers).

Part of the fun in visiting the Nazca Lines is getting there. Some people do it as a day trip from Lima but I wouldn’t recommend it. The drive one way takes about six hours so squeezing that into one day is a bit rough. A better option is to come the day before (a stopover in Paracas Natural Reserve highly recommended but that’s a topic for a separate blog) and stay overnight in the small town of Nazca to be rested and fresh for seeing the lines next morning. Empty stomach is also an important factor, but more on that later. 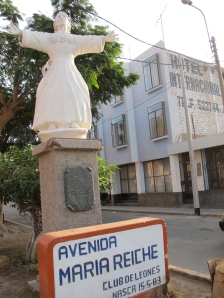 Cruz del Sur operates extremely comfortable busses between Lima and Nazca. If you’re thinking Greyhound, don’t. I have fond memories of a highly reclinable seat, complementary blankets, hot beverage service, and movie entertainment. As for Nazca, I didn’t have much time to spend there but it’s clear that the town exists with a singular purpose in mind: Nazca Lines tourism. The images of the lines are everywhere: bus stops (see above), sidewalks, walls. The most notable landmark is a statue, an oddly religious in its stern form, of Maria Reiche. She was a German-born scientist who devoted much of her life to studying the lines and protecting them from encroaching development such as the Pan-American Highway.

The lines are only a short drive from the town. You come to a small airport, sign up for the next flight – and there is one going up every few minutes – and wait. You can even do some shopping to get your fill of cheap Nazca Lines renditions on anything from a painting to a t-shirt. Now, here comes the disclaimer. The planes that fly over the lines are really small. Just a pilot and 4 to 6 passengers, that’s it. So if the idea of getting on a plane that size makes you uncomfortable, this may not be a trip for you. And a thing to keep in mind is that the quality of your experience will greatly depend on the stomach strength of your fellow aerial explorers.

The lines are best visible when you’re right above them. So to give an equal viewing opportunity to passengers on the left and the right side of the plane, pilots fly in circles or sharp eights, tilting the plane 45 degrees above each figure. You see where this is going. Fortunately both me and my co-passengers persevered (Dramamine helped =) and we got a treat of our lives.

First, the plane rises over the desert. I was trying to put myself in the shoes of those who first saw the lines from above in 1930s (ok, maybe not the first ones if you’re the supporter of the alien theory =) It starts as a stretch of barren land just like any other old desert… 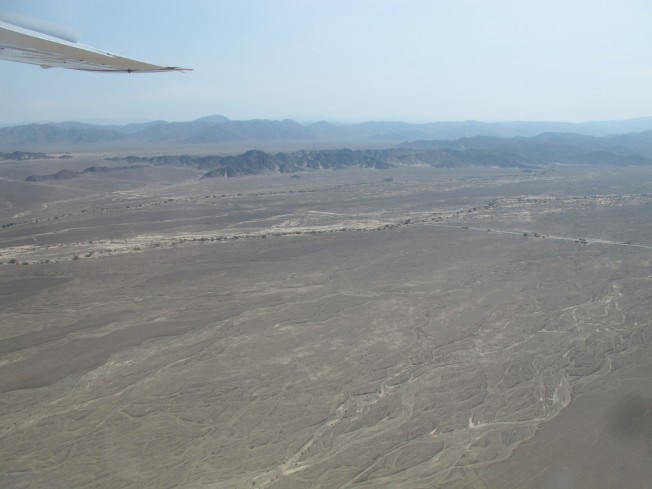 …but then something changes, you think you see something… A whale shape maybe? 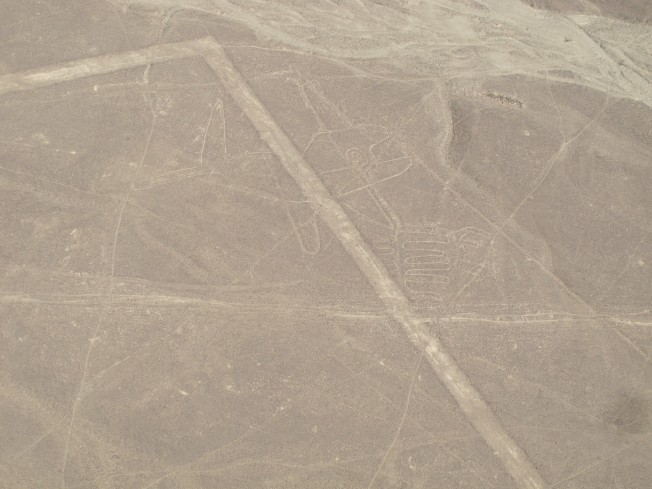 By the time you get to the monkey it’s pretty clear that those are not random lines in the sand. Somebody, for some reason and with a great vision and precision, drew those shapes. Who? Why? I don’t know for sure and we may never know but I can’t take my eyes off of them…

This one is pretty easy to spot also – a spider: 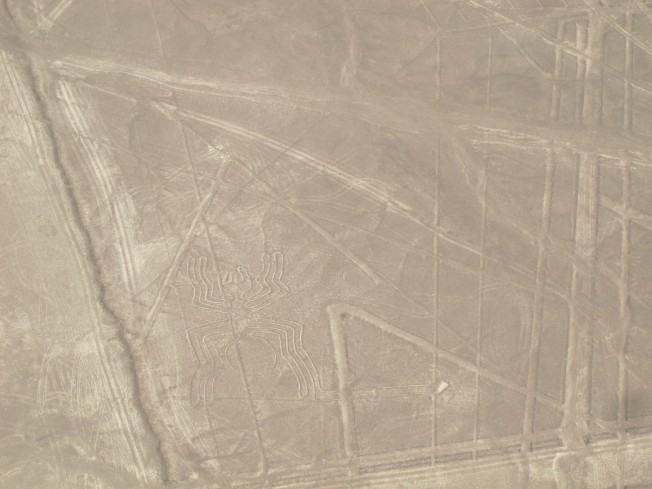 But my favorite is the humming bird – el colibrí – simply a piece of art placed on its own pedestal:

The flight typically lasts about 40 minutes and that’s pretty much the max that most of us can handle unless you’re a professional pilot of small aircraft accustomed to that type of thing. The sights are amazing and definitely worth the flight even if you have lingering qualms about your tolerance. It’s not that bad and if afterwards you feel like don’t want to do it again, the memories will still last you a lifetime =)