Just a short drive of 50 miles northeast from Portland, Mount St. Helens may as well be on a different planet. On May 18, 1980 – exactly 32 years ago – the mountain’s 9,677 ft (2,950 m) tall summit blew its top off and became reduced to 8,365 ft (2,550 m) with much of its northern face replaced by a mile-wide crater. Eruptions are nothing new to this mountain. In fact, local Native American tribes gave it names that clearly indicated a history of violent outbursts, such as Lawelatla (“One From Whom Smoke Comes”), Tah-one-lat-clah (“Fire Mountain”) or Loo-wit (“Keeper of the Fire”). The first European to see the mountain was British Captain George Vancouver. While on a mission exploring the Pacific coast in 1792, he spotted the peak from his ship Discovery as he sailed past the mouth of the Columbia River. He named it after his friend and the British Ambassador to Spain at the time, Alleyne Fitzherbert, Baron St. Helens. Then half a century of activity started with a major eruption in 1800. After 1857 the mountain remained largely quiet lulling locals and tourists alike into thinking about it as a harmless, picturesque sleeping giant – the snow-capped “Fujiyama of America.”

Mount St. Helens in 1973, 7 years before the eruption (photo: nationalgeographic.com)

That 123-year tranquility was abruptly broken by a magnitude 4.2 earthquake that shook the mountain on March 20, 1980, signaling its awakening and starting a build-up to the May 18 blast. And a substantial one it was: as more than 500 million tons of volcanic ash shot up into the sky, the blast flattened trees 20 miles away laying waste to 150 square miles of old forests, killed 57 people, and triggered the largest landslide in recorded history.

The evidence of that epic destruction is still clearly visible today. Burned out tree-stumps eerily stand guard along the road leading to the volcano, looking so post-apocalyptic that film director John Hillcoat used Mount St. Helens as a part of the backdrop for his dark tale The Road.

As you approach the mountain, the landscape becomes more and more barren, more and more alien. From the first peak at the distant peak… 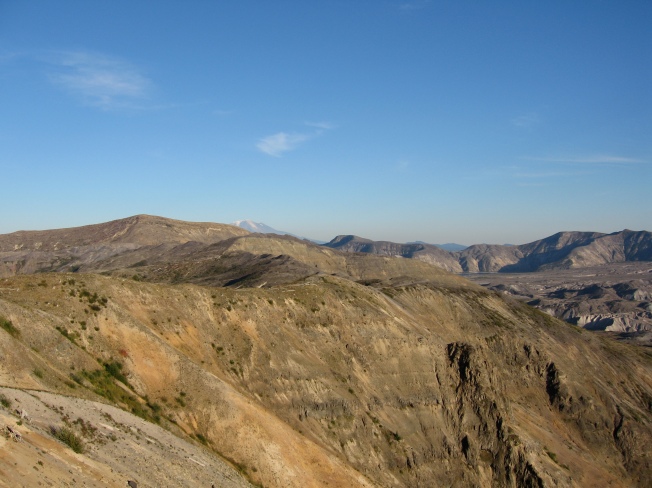 …to the full view of the awesome crater…

But as much as we tend to think about destruction when we think of Mount St. Helens, the story or rebirth and renewal is an equally fascinating one. After the eruption, life quickly returned to the desolate blast zone. Moles, gophers, and ants survived buried underground and thereafter played a vital role in turning deadly lava and ash into rich volcanic soil where plants can flourish again and support animal life. Today shrubs and trees are slowly greening up the landscape and even large animals such as elks are back. 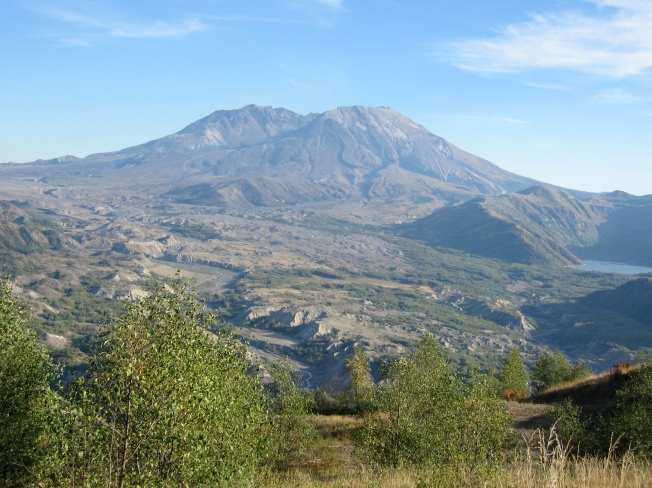 At the terminus of the Spirit Lake Memorial Highway that my husband and I followed to the crater, there is the Johnston Ridge Observatory. It’s a vantage point that brings you within five miles of the north – exploded – side of the volcano and offers spectacular views. Inside the 16,000 square-foot facility you can learn more about Mount St. Helens but its most spectacular feature is a wide-screen theater. Wait for the curtain finale! The screen goes up to reveal floor-to-ceiling windows made of special, non-refective glass to seamlessly blend with the vista:

Finally, a practical tip. Don’t be discouraged if on the day your are planning to visit Mount St. Helens the weather where you’re staying doesn’t look great because that may not be the case at the peak. We stayed in Portland and on the day of our excursion woke up to dense fog. The best thing to do it call the Observatory (360-274-2143) to ask about the current weather. This is what we did and as soon as we left the city and got to higher elevation the sun came out. We spend the day – and a glorious one it was! And we left wishing Mount St. Helens sweet dreams, hopefully for the decades to come… 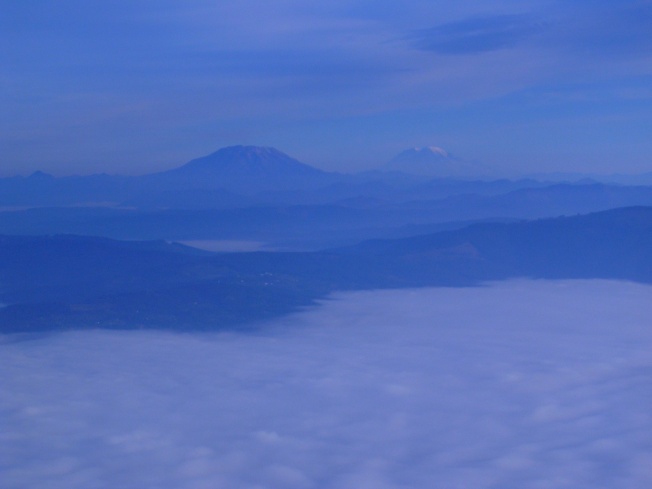