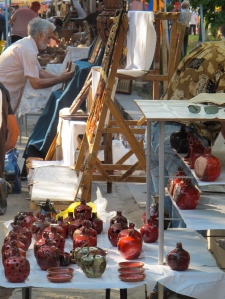 Pomegranate is the central fruit in Armenian culture and a staple fruit in Armenian households worldwide. It’s also an item you are bound to find in all sorts of forms in Yerevan’s Vernissage flea market held every weekend behind Republic Square metro on Nalbandyan street. You can find pretty much anything here, from jewelry and paintings to irons and electric tea kettles. In this bustling bazaar of different shapes and colors, the silhouette and shade of pomegranate is a familiar, reoccurring constant. Pomegranates inspire ubiquitous crimson-red pendants, sway on the wind-rippled surface of delicate silk scarves, glow in the sun reflected off the glazed fruit-shaped clay pots. This ancient symbol of fertility and abundance is still omnipresent today.

Weaving pomegranate imagery into both art and daily lives of Armenians must be at least as old as Yerevan itself, dating back to the 8th century BC when the ruler of the ancient Urartu kingdom built Erebuni fortress on a high point over the Ararat plain. Some claim the name “Yerevan” derives from Erebuni. Others attribute it to Noah who allegedly exclaimed “Yerevats!” (“it appeared”) looking toward what is now Yerevan from the top of Mount Ararat after his ark had landed there and the flood waters receded. I bet he reached for a pomegranate snack right after that =)

I found this great video on Youtube that hopefully will give you a taste:

Peeling a pomegranate is not an easy task. Getting at Armenia’s complex core isn’t any easier. Yerevan in many ways symbolizes the country’s tangled past where sweet kernels of glory and bitter pith of pain are tightly squeezed together into the contours of Armenia that exists today. Founded before Rome, Yerevan is one of the oldest cities in the world. Because of its strategic location at the crossroads of trade routes between Europe and Asia, empires – from Persian and Ottoman to Soviet – have fought over this land throughout centuries. The defining moment in the country’s history was adopting Christianity in 301 AD – the first nation in the world to do so – when St. Gregory the Illuminator successfully converted the Armenian king and his court (I think his name sounds much better in the local vernacular by the way: Grigor Lusavorich). 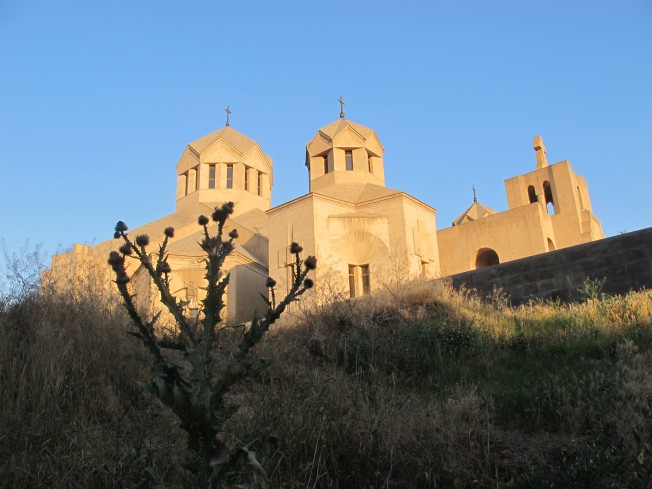 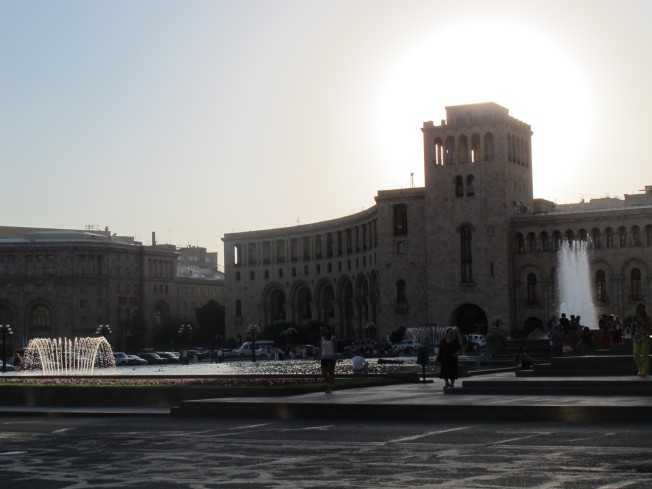 The evidence of ancient Christian roots is on display in particular in Armenia’s monasteries. Khachkars, or elaborately carved Medieval stone crosses, adorn those amazing structures. One of the most noteworthy Armenian monasteries is the unique Geghard, partially carved out of the adjacent mountain. Its history dates back to the times of founding of Armenian Christianity, which combined with the stunning architecture and natural surroundings deservedly earned the Geghard monastery a place on the UNESCO World Heritage list. Its proximity to Yerevan makes Geghard, along with the nearby Greco-Roman Garni temple built in the 1st century AD, extremely popular and easily accessible destinations for a taste of Armenia beyond the capital. 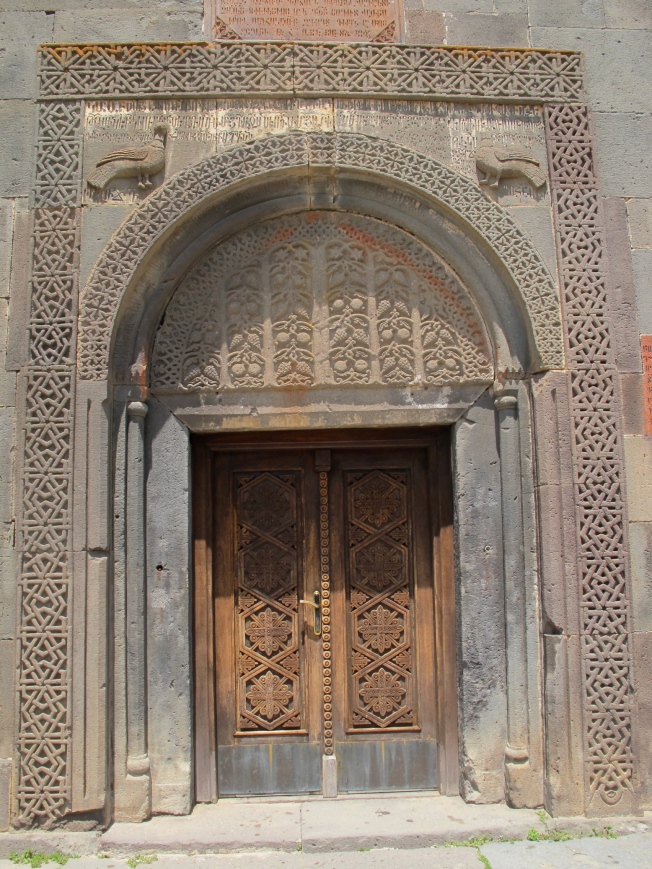 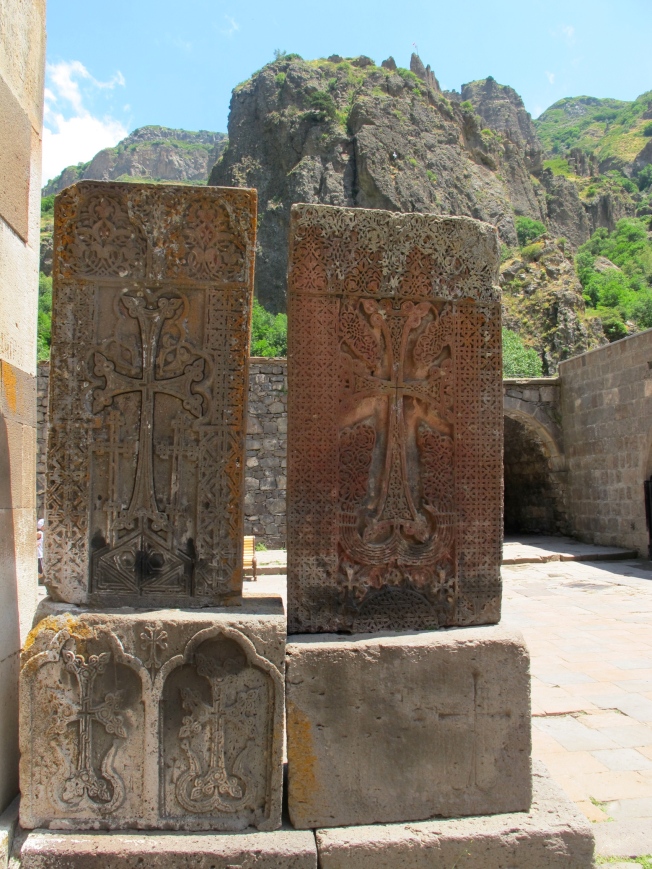 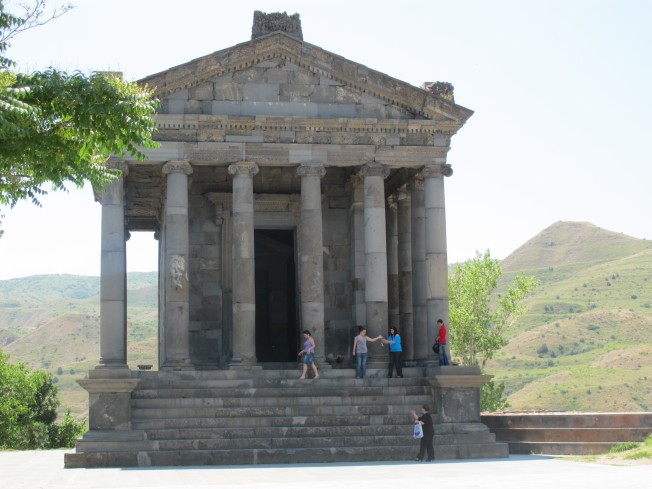 In the modern times the defining moment for Armenia came in 1915. It started on April 24, 1915 with the arrest of Armenian leaders in the Ottoman Istanbul, followed by mass deportations and massacres that led to deaths of at least half a million and maybe as many as 1.5 million Armenians. Turkey, the Ottoman Empire’s heir, vehemently resists the use of the word “genocide” to describe those horrid events, attributing the deaths to the chaos of WWI. But regardless of how one chooses to call that dark time, the end result was emptying of Eastern Anatolia (or Western Armenia depending on your perspective) of its Armenian population, the loss of hundreds of historic and cultural artifacts, and rapid acceleration of the survivors’ exodus from the region. Today the diaspora vastly outnumbers roughly 3.3 million Armenians living in contemporary Armenia. About half of them live in Yerevan in the shadow of the majestic Mount Ararat, history’s silent witness. There is something magnetic about this mountain – I could stare at its snow-cowered peak for hours. Magnificently looming on the horizon, it is always there seemingly close enough to touch and yet it remains distant across a closed border.

After WWI, Yerevan became the capital of the short-lived Democratic Republic of Armenia incorporated into the Soviet Union in 1922. Armenia didn’t regain independence until 1991, with a turbulent decade involving a war with neighboring Azerbaijan to follow. Let’s just say the 20th century wasn’t very kind to Armenia (and as a Pole I can relate). Many old conflicts remain unresolved, many wounds still feel too fresh to heal even decades later. William Saroyan, an Armenian American writer, captured the essence of that mix of the memory of near-extinction suffering and stubborn perseverance permeating Armenia’s collective consciousness: 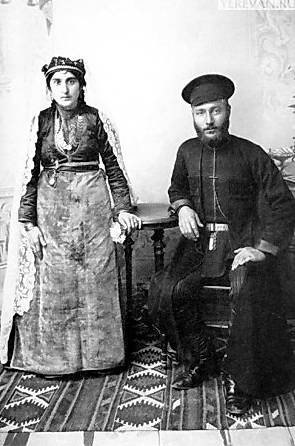 “I should like to see any power of the world destroy this race, this small tribe of unimportant people, whose wars have all been fought and lost, whose structures have crumbled, literature is unread, music is unheard, and prayers are no more answered. Go ahead, destroy Armenia. See if you can do it. Send them into the desert without bread or water. Burn their homes and churches. Then see if they will not laugh, sing and pray again. For when two of them meet anywhere in the world, see if they will not create a New Armenia.”

But painful history does not necessarily have to determine the future (also speaking from Poland’s experience). In time, there can be reconciliation and even forgiveness – or so we all hope as inhabitants of this one earth.

Whether in Yerevan or Fresno, Armenians carry the soul of their nation wherever they go. Saroyan again…

“My birthplace was California, but I couldn’t forget Armenia, so what is one’s country? Is it land of the earth, in a specific place? Rivers there? Lakes? The sky there? The way the moon comes up there? And the sun? Is one’s country the trees, the vineyards, the grass, the birds, the rocks, the hills and summer and winter? Is it the animal rhythm of the living there? The huts and houses, the streets of cities, the tables and chairs, and the drinking of tea and talking? Is it the peach ripening in summer heat on the bough? Is it the dead in the earth there?”

If Saroyan offers a glimpse into the Armenian soul, Sergei Parajanov gives us tour de force on the subject. In his moody, metaphorical, and occasionally mind-boggling 1968 film The Color of Pomegranates he tells the life story of 18th century poet and musician Sayat-Nova through a series of visually stunning, non-linear minatures. I saw it after returning from Armenia and I can’t claim I fully understood the historical significance or cultural symbolism of all that I saw – both on the ground and on the screen. But even getting just a taste of a few morsels of the Armenian pomegranate can be a sumptuous feast. 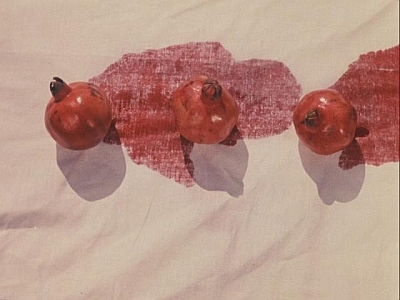 Frame from The Color of Pomegranates