The bridge on the Drina (Image source: http://www.balkantravellers.com)

Ever since I read The Bridge on the Drina, a great novel by Nobel prize-winning Yugoslav writer Ivo Andrić, I’ve wanted to go to the Balkans. I was fascinated by the history of the region where the East meets the West, Islam and Christianity mix, and Slavic and Ottoman influences (among others) have been interwoven throughout the ages. That’s essentially what Andrić’s novel is about. Using as a metaphor the UNESCO-listed 16th century Mehmed Paša Sokolović Bridge in the town of Višegrad, today close to the Bosnian-Serbian border, he explores the complicated history and equally complex identity of the region. Andrić didn’t live to see the lastest tragic chapter added to his 400-year long tale – fratricidal wars of the 1990s. The story continues on a happier note today although certainly it’s not all water under the bridge…

I haven’t made it to the bridge on the Drina (yet), both literally and metaphorically speaking. I simply don’t feel like I have good enough grip of the Balkan history and culture to comment meaningfully on the subject of what happened in the region in the last two decades (but apparently Angelina Jolie does). So instead I’d like to share a few impressions of the part of the Balkans I do know, Belgrade. Like the bridge on the Drina, Belgrade’s bridges have their own share of linking (or dividing – depends on a point of view) countries and cultures. This is where the Sava and Danube rivers meet. And this is where the Ottoman and Austro-Hungarian Empires coexisted and clashed for ages. Belgrade’s long-standing history as a defensive outpost is clearly on display when you cross the Sava river driving from the airport. Two things stand out: the statue of Serbian Pobednik, or Victor, and the massive wall of Belgrade Fortress perched on the hill.

Belgrade Fortress is a citadel with the history dating back to a Roman settlement and the old urban core of the city that for centuries was contained within its walls. These gleaming stone walls is what gave Belgrade its name: Beograd or “white city” in Serbian. Different parts of the fortress were built (and rebuilt) at different times given that Belgrade was destroyed and reconstructed over 40 times in its long, tumultuous history. 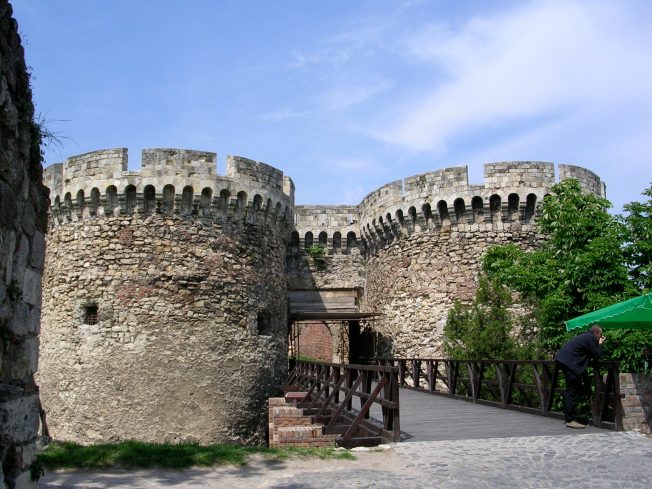 The fortress is located in the expansive Kalemegdan Park (Kalemegdan = kale-fortress + meydan-battleground in Turkish) which is a beloved chill-out destination for the locals. On a sunny day the entire families come for a stroll, with all age groups represented, taking in the relaxing atmosphere of this green urban oasis and enjoy great city views.

Before I went to Belgrade my image of Serbia was overwhelmingly negative, tied to violence and destruction of the 1990s. Also in popular culture Serbia simply gets a bad rep. Think of your typical Hollywood crime flick – if it features a brutal European gangster, it’s a 50/50 chance he’s either Serbian or Russian. Finally, having grown up under the communism with its many appalling architectural deformities and general urban drabness, I was picturing a gray, cold, worn and generally uninviting city. I was definitely in for a positive surprise.

Square of the Republic, National Museum in the background

Yup, this is Belgrade. Gorgeous squares, lively streets, and a hip-looking guy who walked into my frame =) This was definitely the best part of my time there – just walking around and looking for unexpected finds. Definitely it’s not all new and hip. But it’s the mixture of the new and the old like the one found here that I always appreciate.

Lost somewhere in Belgrade - and in time

And Belgrade is very pedestrian friendly. The best place to start is Knez Mihailova street, pedestrian-only shopper’s paradise. It especially comes to life at night complete with throngs of foodies on a restaurant crawl and street musicians. A great evening destination is also nearby Skadarska street, the heart of a former Gypsy quarter and today a favorite hangout spot for locals and tourists alike. This short, steep, and curved cobblestone street is really more like an intimate alley with awesome cafés, restaurants, and art exhibits. My favorite spot: the outside sitting area of Zlatni Bokal restaurant, enjoying ćevapčići (yes, if you can pronounce it, you must know a Slavic language =), traditional grilled minced meat dish.

Any walk around Belgrade should also include Terazije, a central street with some impressive architecture like the 1906 Hotel Moskva, built in 1906, with its stunning ceramic tile facade. It’s a great destination for desserts by the way. 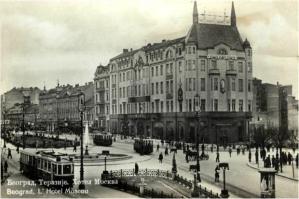 One of the most famous structures in Belgrade, Hotel Moskva has been a favorite place of the cultural elites including Ivo Andrić who regularly frequented the restaurant. The hotel has hosted many international celebrities over the years.

Walking down Terazije, you can sample the wealth of local cuisine. Snack-wise one thing that stuck in my memory was burek, traditional Turkish pastry filled with meet, cheese, and vegetables. But I have to admit I remember it less for its taste than the name. “Burek” is a common name for a dog in Polish – not that this has anything to do with the type of meet used in burek, just a mnemonic device =) From Terazije you also get an amazing view of the Cathedral of Saint Sava, the largest Orthodox church in the Balkans. The idea to build it dates back to 1895 but let’s just say it took a while to implement. When I was there a few years ago, I walked into the church with anticipation of the usual opulence of an Orthodox temple only to be sorely disappointed: the place was totally empty inside, the interior still under construction. I hear it’s been finished by now so that’s definitely one reason to go back.

Back to the bridge theme… When in Belgrade, don’t miss an opportunity to cross the Sava river to the western district of Zemun. Historically, Zemun was its own town that didn’t become a part of Belgrade until after WWII. But for a long time it was more than a separate town: it was in a different country. Belgrade proper was conquered by the Ottomans Turks in 1521 and remained a part in Ottoman hands until the 19th century, punctuated by several Habsburg intrusions. The Treaty of Belgrade signed in 1739 ended one of them when the Ottomans and the Habsburgs set the rivers Sava and Danube as demarkation lines between the two. That meant Zemun became a part of the Austro-Hungarian Empire and stayed that way until 1918 when it became a part of Yugoslavia. Going to Zemun is like stepping back in time. It has none of Belgrade’s urban bustle. In fact, it feels more like a village probably the same way it felt a hundred years ago. The focal point of the town is Gardoš tower (also called the tower of Janos Hunyadi) built in 1896 to celebrate a thousand years of Hungarian settlement in the area given that Zemun at the time was the southernmost city in Austria-Hungary. Gardoš looks a bit sad these days, its base covered in graffiti. But seeing it up close is definitely worth the climb up Zemun’s narrow streets: a view from the top.

But the panorama of Zemun from Gardoš is worth the climb

Another place I found to be very special in Zemun is its historic cemetery. Symbolically, it feels like a burial place of old, Austro-Hungarian Zemun itself. Among newer graves with Slavic names are many older ones with inscriptions in German, silently telling the stories of Zemun as it once was and the Balkans as they once were.

“It is now 1914, the last year in the chronicle of the bridge on the Drina. It came as all earlier years had come, with the quiet pace of winter but with the sullen roar of ever new and ever more unusual events which piled upon one another like waves. So many years had passed over the town and so many more would still pass over it. There had been, and there still would be, years of every sort, but the year 1914 will always remain unique. So at least it seemed to those who lived through it.”
– The Bridge on the Drina, Ivo Andrić