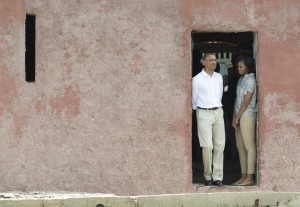 President Barack Obama and First Lady Michelle Obama look out from the Door of No Return on Gorée Island (Photo: SAUL LOEB/AFP/Getty Images)

President Barak Obama’s recent trip to Senegal, and especially his stop at Gorée Island, made me think back to my own visit there. Gorée is a tiny island in the Dakar harbor with painful history lurking beneath its charm of a colorful Mediterranean-like seaside village. From the 15th to the 19th century it was one of the slave-trading outposts on Africa’s west coast. The island was ruled in succession by the Portuguese, Dutch, English, and French and participated in the trans-Atlantic slave trade for over three centuries until the mid-1840s, although academics differ on how many slaves actually passed through there.

Regardless of such debates, though, today the island remains a haunting place and a powerful symbol of humanity’s transgressions and, ultimately, redemption. President Obama visited with his wife and daughters last June. Moved Michelle Obama – whose ancestors were brought to America as slaves – penned an emotional essay based on her experience in Gorée. She wrote: END_OF_DOCUMENT_TOKEN_TO_BE_REPLACED