Continuing with the theme of historic photographs, I found some fascinating images of Warsaw from the 1860s – the oldest surviving images of the city. They were taken by Karol Beyer, the father of Polish photography, who in 1845 became the first professional photographer in Warsaw. Over the years he took a series of photographs of Warsaw and other Polish cities that today are priceless documents of those times. He also captured hundreds of portraits immortalizing the locals (and himself in several self-portraits like this one here).

A little history background: in Beyer’s time there was no such thing as Poland, politically speaking, since the partition of 1795 between Russia, Prussia, and Austria-Hungary erased it from the map of Europe for the next 123 years. Warsaw became a part of the Russian Empire. In early 1860s, the unrest was brewing throughout the Polish territories. After a series of demonstrations in different cities, Tsar Alexander II declared martial law on October 14, 1861.

In this photo, taken shortly thereafter, Russian soldiers are camping on the square in front of the Royal Castle. If you’ve been to Warsaw, you surely recognize Zygmunt’s Column in the upper right hand corner.

Russian troops marching toward Saski Palace in 1861. A section of the colonnade is the only part of the Palace that survives today as the Tomb of the Unknown Soldier.

The unrest continued, leading to the so-called January Uprising that began on January 22, 1863 and lasted for almost two years ending in a defeat and personal disaster for those who supported it. That included Karol Beyer who was arrested in 1863 and sent as prisoner into Russia’s interior. After the uprising ended, he was allowed to return to Warsaw and reopened his studio, which functioned until 1867. The studio is long gone, but his amazing images of the city that no longer exits (both figuratively and literally given the extent of Warsaw’s destruction in WWII) are still here.

Corpus Christi religious procession on Krakowskie Przedmieście street in front of the Holy Cross Church, May 30, 1961 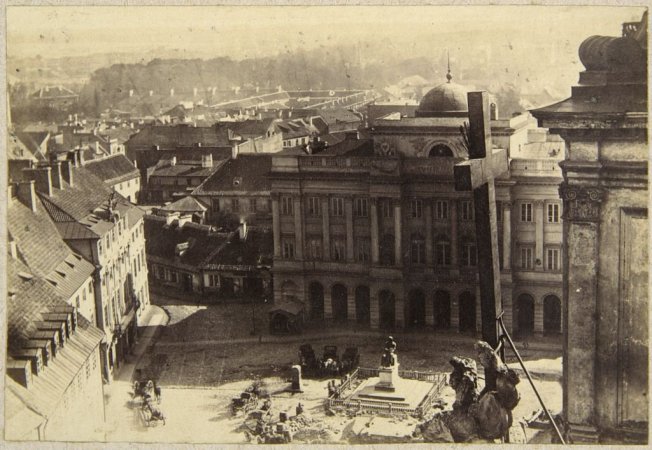 View from the steeple of the Holy Cross Church looking toward Staszic Square. The statue of Copernicus visible in the foreground is still there.

Peasants from Wilanów near Warsaw, 1866